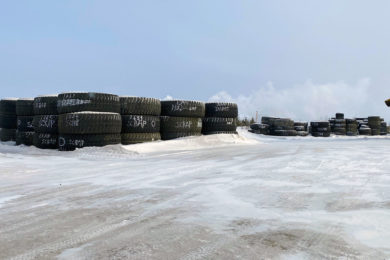 No less than 501 scrap large mining tyres, each about 11 ft tall and 5 ft wide, were recently removed from Imperial Oil’s Kearl oil sands mining operation north of Fort McMurray, Alberta and brought to the Liberty Tire LLC recycling facility in Legal, north of Edmonton, in a project managed and executed by Kal Tire Mining Tire Group. From there, the tyres will be shredded and turned into tyre crumb, which is used in tyre-derived fuel, or products such as turf systems, flooring and paving.

Kal Tire began to offer this earthmover tyre recycling service for sizes up the largest 63 in across BC, Alberta and Saskatchewan in western Canada in May 2016. Up to that point, if a tyre on a mine in the region was no longer usable, it was sent to the scrap pile, where it probably stayed. As it sells and services these tyres, Kal Tire wanted to offer customers a simple, viable, environmentally friendly alternative when tyres reach the end of their life.

Over in Chile, Kal Tire since last year has been operating its first thermal conversion recycling facility in Antofagasta with the capacity to process 20 t/d including the largest ultraclass tyres. This thermal conversion approach, once known as pyrolysis, decomposes organic tyre materials using heat in the absence of oxygen, and returns tyres to their original materials: fuel oil, steel wire and carbon black. The company says 40% of the weight of the scrap tyres has the potential to return to mines as alternative fuels – a major step towards achieving a circular economy. Kal Tire arranges transport, loading and unloading of all sizes of the scrap tyres.