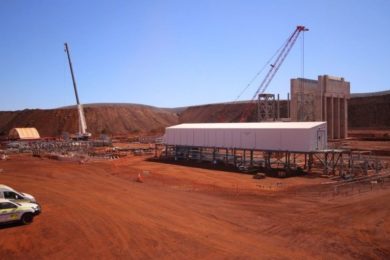 Rio Tinto has to date awarded contracts valued at over $385 million (A$500 million) to local Western Australian and Pilbara Aboriginal businesses to support the latest development of its Greater Tom Price Operations.

Construction of the Western Turner Syncline Phase 2 (WTS2) expansion commenced in early 2020 and to date more than 85% of spending on the project has been awarded to Western Australian and Pilbara Aboriginal businesses, directly through Rio Tinto or principal contractor Mondium. At peak construction, development will support a workforce of over 1,000 people with the majority employed by WA businesses, including Guma Warnii, Monadelphous, Mondium, Kerman Contracting, Whittens, North West Mining & Civil, MACA Civil, Linkforce and Aerison.

Rio Tinto approved the $749 million (A$1 billion) investment in the mine in November 2019 to sustain production capacity of its iron ore business in the Pilbara. The investment allows for the mining of existing and new deposits at WTS2 and includes construction of a new crusher and a 13 km conveyor which will help lower greenhouse gas emissions from the mine by 3.5% compared to road haulage. First production from the new deposits at WTS2 is expected in the second half of 2021.

Premier and Minister for State Development, Jobs and Trade, Mark McGowan said, “The Pilbara region is the engine room of the nation, and thanks to Western Australia’s strong management of the pandemic, we can expect more job-creating projects to come online in the coming years. Rio Tinto has been embedded in the Tom Price community for decades and have made a significant contribution to the town. I congratulate Rio Tinto for its commitment to this important project. This project will ensure Tom Price has a bright future and my government is committed to ensuring mining communities have first class services to support local families.”

Rio Tinto Iron Ore Managing Director of Pilbara Mines, Matthew Holcz, said Rio Tinto’s commitment to Tom Price and regional communities remains as strong as ever. “Tom Price is the birthplace of Western Australia’s iron ore industry and more than 50 years later this $749 million (A$1 billion) investment in the Western Turner Syncline Phase 2 expansion will underpin the viability of this proud town for decades to come. We are proud the vast majority of contracts we have awarded to date have been to Western Australian businesses, including Pilbara Aboriginal businesses. This investment demonstrates our commitment to spending with local businesses, buying locally and supporting our communities through the creation of jobs.”

Rio Tinto Iron Ore currently employs more than 50% of workers living in Tom Price and this latest development will extend employment opportunities into the future.

Contractor Mondium recently stated that three major milestones have been achieved at Western Turner Syncline Phase 2 Project. First, landing the switch room at the primary crusher area. The earthworks team cleared the roads for the Structural Mechanical Piping (SMP) team to bring the switch room to site and lift it into position. Installation is also complete of a 167 t surge bin into the existing WTS1 transfer station by the SMP and Heavy Lift teams. Finally, delivery of the primary crusher to site and safely putting it in the laydown yard for preassembly and thereafter installation.