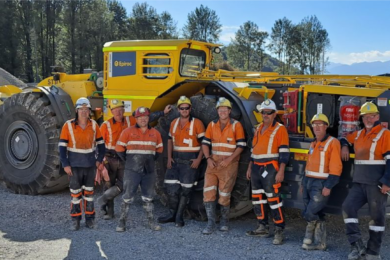 Federation Mining, established by experienced Australian underground mining engineer and former Founding Evolution Mining COO, Mark Le Messurier, is progressing well with the early development of the planned Snowy River gold mine project (formerly known as Blackwater) at Ikamatua near Reefton on the West Coast on the South Island in New Zealand. As of March 1, The team was continuing to work on the twin declines at Snowy River with 143 m developed across both declines, approaching the first cross cut. The site now has an administration building, change rooms, store and lay down, lunch rooms, security gate, washdown pad, water treatment ponds, sewerage system, communications, electrical & water infrastructure, drainage, roads and all-weather access with a bridge over the Snowy River.

The declines are part of the overall development of 3.3 km underground twin declines to the base of historic workings followed by establishment of drill chambers and drives, completion of the drill program and completion of feasibility studies to increase confidence in the current 700,000 oz Mineral Resource and underpin a potential decision to mine. Snowy River remains an OceanaGold exploration project, with it supporting Federation Mining with seed financing. Under the terms of the agreement, Federation Mining has the exclusive right to purchase the project from OceanaGold upon Federation Mining deciding to develop the mine. Federation remains private with the aim to go public with an IPO in the next couple of years.

New Zealand Petroleum and Minerals has already granted Federation Mining a Mining Permit for the Snowy River Mine near Reefton on the West Coast of New Zealand’s South Island. The approval grants the right to mine gold and silver from the site for a 20 year period. Subject to regulatory approvals and the results of the Feasibility Study, first gold production from the Snowy River Mine could occur by 2024. Production is planned at a rate of ~70,000 oz/y for 14 years. Funding sources include a NZ$15 million loan from the New Zealand Provincial Growth Fund (PGF).

Back to the site progress, and the team has also connected the operations to the power grid and can now remove the gensets plus with the first nightshift in February switched to being a 24/7 site with the total project staff total now 28. Steven Wilson has been appointed as the new General Manager with over 20 years of experience in the mining industry in operational, technical and management roles at both miners and contractors with big names like Barminco, MMG and Freeport Indonesia.

Equipment-wise, a new Epiroc ST18 18 t Scooptram arrived in February as the new haulage workhorse. A second interchangeable tool carrier from Trans Diesel has also arrived and a new M2D jumbo and shotcrete machine due in late March. The operation is currently using a refurbished Epiroc Rocket Boomer jumbo. For actual mining in the future to maximise productivity and safety, the company intends to utilise modern narrow vein mining equipment with a proposed mining method of uphole bench stoping as a preferred & safer alternative to airleg mining.

The history of the Snowy River Project dates back to 1905 when the main “Birthday Reef” was discovered by a small prospecting group. Mining is said to have commenced shortly afterwards in 1906 and the operation continued for 45 years up until 1951. During this period the mine produced about 733,000 oz of gold. It was worked from two shafts – the Blackwater Shaft and Prohibition Shaft – and mined to a depth of 800 m across 16 levels. The mine was still operating in profitable ore when the collapse of the Blackwater Shaft resulted in the closure of the operation. It is still considered one of the richest and most consistent gold reefs discovered anywhere in the world.