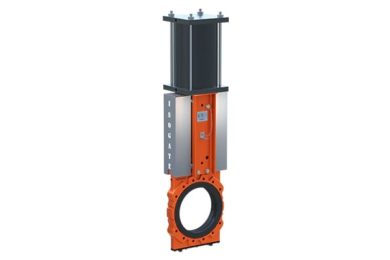 The release came on the same week Weir Group announced its 2020 financial results, which saw the company report revenue and adjusted operating profit of £1.97 billion ($2.73 billion) and £305 million from continuing operations, respectively. These figures were down 4% and 3%, respectively, from 2019 totals.

“The weight reduction can be especially significant in situations where a number of valves are used on a specific installation, such as in a hydrocyclone cluster, or where lightweight piping systems are used.”

The gate has also been redesigned, with stronger materials resulting in a thinner gate that can still withstand the pressure of mining slurries. This combines with the valve’s unique gate guide that, Weir says, reduces deflection by ensuring smooth gate movement and less strain on the sleeve elastomer during blade transition.

Leveraging the Linard HD 60 rubber’s high resilience against cut, tear and abrasive wear to improve wear life, the new Isogate WSL sleeve fully encloses the LDR to prevent corrosion. By allowing the rubber to move with the blade cycles, the design reduces the chance of tearing while reducing slurry discharge by up to 75%, according to Weir.

Abbott added: “When designing the Isogate WR knife gate valve, we focused on features that improve the everyday experience of working with our valves. This includes important things like improved grease distribution and improved body flushing when used on high solids concentration applications.

“In-depth finite element analysis enables us to ensure the product’s integrity, while making it lightweight. There are also a lot of smaller features to make life easier, such as a larger grease reservoir, ISO mount standardisation and an external visual indicator for the valve’s status.”

This collaborative effort with key mining customers provides enhanced safety for maintenance personnel during the replacement of worn Nemisys® points and adapters, according to ESCO. It features a hydraulic crane mounted tool that is remotely operated, well out of harm’s way during the replacement of worn components. New parts are pre-staged on racks  positioned on the flatbed truck outfitted with the hydraulic crane. The truck also features a recycle bin for safer disposal of worn parts.

Alongside this, Weir said in 2020 it installed the first pilot Terraflowing® plant at a customer’s mine site designed to cost-effectively reduce water in tailings, enabling this waste product to be safely stored or repurposed.

Terraflowing incorporates a two-stage cyclone dewatering process followed by centrifugation of the final stage of cycloning overflow. In the process, three dewatered tailings streams are produced: a primary cyclone underflow, a secondary cyclone underflow and a centrifuge pulp. These three streams can be combined or used in different configurations depending on the end use of the tailings stream, according to Weir Minerals.

This three-stage system offers the flexibility to make provision for variations in mineralogy and particle size distribution as well as the opportunity to recover ‘tailings as a resource’, it added.