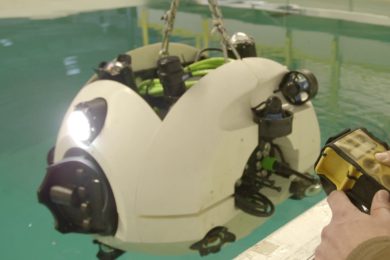 The new UX-1Neo robot is designed to perform underwater mine and other site surveying missions in the EU and worldwide, and collect valuable geoscientific and spatial data from these sites. The technology developers of the UNEXUP project supported by EIT RawMaterials took onboard the operational limitations found in the former UX-1 robot, built during the Horizon 2020 UNEXMIN project, and addressed them when developing the new robot in 2020: the UX-1Neo.

“This new robot has similar dimensions and functionalities as its predecessor; however, it brings hardware and software improvements such as easy swappable batteries, faster data retrieval, an additional camera, an additional scanning sonar, ease of transport, and lower weight. These improvements, together with better geoscientific instrumentation, will make it more versatile and effective in the field, resulting in more productive and cost-effective missions. UX-1Neo is ready to perform, and field missions were already scheduled for the upcoming months of 2021. Among the planned activities are an inspection of a water well, a survey of an abandoned underground salt mine, and other advanced possibilities overseas.