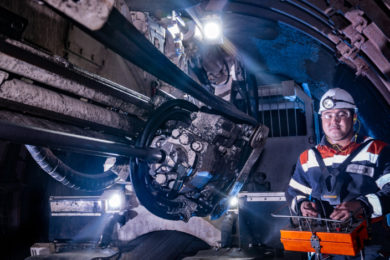 In December 2020, SIEMAG TECBERG and TNC Kazchrome JSC signed a contract for the delivery of shaft hoisting systems. Kazchrome is a fully integrated mining and metallurgical company in Kazakhstan covering all stages of the value chain from geological exploration to underground mining and the extraction of raw materials to the production of metallic products.

Kazchrome is owned by the Eurasian Resources Group (ERG) based in Luxembourg. With Donskoy GOK, the group is pursuing a large and ambitious shaft construction project to increase the chrome (chromite) ore mining production by 10 Mt from the current level of approximately 5.6 Mt to almost three times this amount. This ore, high in chromium oxide content (up to 62 % Cr2O3), is used for the metallurgical production of ferroalloys as well as refractory products and chromium compounds in the chemical industry.

The existing Donskoy Ore Mining and Processing Plant (DGOK) complex was established in 1938 in the town of Khromtau in the Aktobe region of mid-western Kazakhstan, approximately 700 km from the Caspian Sea. According to the company, the volume of confirmed chrome ore reserves is the second largest in the world and the quality of the chrome ore meets the highest quality standards. The Donskoy Ore Mining and Processing Plant employs a total of 7,500 people.

Both hoisting machines are designed as a skip/skip system for a considerable shaft depth of 1,487 m. “The design of the main shafts together with the plain bearings ensures a largely wear-free operation and the greatest possible availability of the two hoisting machines – both key arguments in favour of SIEMAG TECBERG. The design based on the SIL standard offers the operator and his employees a very high level of safety, which is also a very important criterion in the selection of suppliers.”

For SIEMAG TECBERG this first order for a new customer from Kazakhstan it says “once again confirms the company‘s performance promise. Together with the TECBERG ROSENSTEIN subsidiary, which was founded in 2020 and focuses specifically on the CIS states, the company based in Haiger-Kalteiche in Germany has recently been able to further impress customers with its special and comprehensive ‘Logistics & Certification Competence for the CIS.’ This allows the customer during the ‘Delivery and Certification’ project phase to transfer and register the equipment to his plant inventory as quickly and smoothly as possible under official supervision.”

At the recently expanded Kalteiche TECBERG park near Haiger, the customer can also count on an efficient assembly and a final on-site commissioning at his mine, thanks to a complete assembly of the complete equipment at the factory that includes extensive system tests of the drive technology on drive-train test benches and a pre-commissioning with all the pre-adjustments.

There is yet another reason why SIEMAG TECBERG considers the order from Kazakhstan to be very significant. “In the present global investment crisis caused by the Corona pandemic, we consider this order from Kazchrome to be an explicit acknowledgement of our heavy machinery ‘Designed, Assembled and Pretested in Germany‘ which has once again prevailed against global competitors and especially against emerging manufacturers from China and Russia. The respective governments of those important primary producing countries exercise massive influence to localise the technology production for their own construction of industrial plants.”

“The continuous development of product innovations combined with the system integration of mechanics, hydraulics, automation, drive and signalling technology under the same roof is the unique selling point of SIEMAG TECBERG and this has led to the leading market position,” says Jürgen Peschke, Managing Partner of the SIEMAG TECBERG Group.