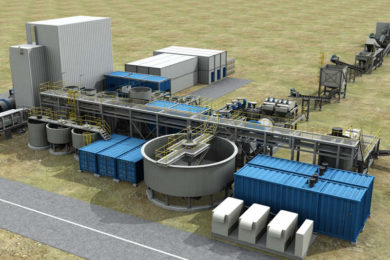 NextSource Materials Inc has announced it has commenced the construction process of its Molo graphite mine in Madagascar with the awarding of the EPCM contract to Erudite Strategies Ltd of South Africa. The statement said: “Erudite has an excellent track record of delivering projects on time and on budget in Africa, with a particular expertise in fit-for-purpose solutions that cater to the global battery industry.” The EPCM contract is now being finalised. The Molo graphite mine is targeted to be fully operational in March 2022 and will host a processing plant capable of processing 240,000 t/y of ore and producing approximately 17,000 t/y of high-quality SuperFlake® graphite concentrate.

Craig Scherba, President and CEO, commented: “Awarding the EPCM contract to Erudite is a key step to ensure the continued successful development and construction of the Molo project. With a team that has built numerous mining projects on the African continent, Erudite’s track record of developing efficient mines on time and on budget is unparalleled. Erudite is very familiar with the Molo project, having performed the 2017 Feasibility Study, the 2019 Updated Feasibility Study, and the previously completed front-end engineering and design. With our owner’s team now in place, Erudite will be able to immediately build on its past work and progress and advance the project in a cost effective and timely manner. We are looking forward to continuing on our path to becoming the next significant graphite producer globally with commissioning of the Molo mine scheduled for March 2022. We look forward to finalising the EPC contract with our all-modular mine manufacturer in April.”

On March 15, the company announced the closing of the first portion of the previously announced total financing package of $29.5 million, which fully funds the construction of the company’s Molo graphite mine in Madagascar committed by Vision Blue Resources Ltd, a newly created battery commodity/resource-focused investment company founded by Sir Mick Davis, former CEO of Xstrata Plc. Davis was also appointed Chair of the Board of NextSource.