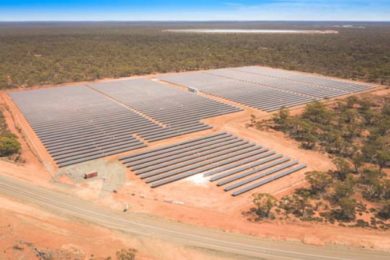 Red 5 Ltd has entered into a Power Purchase Agreement with a subsidiary of Zenith Energy Ltd that will see the growing Australia-based power producer build, own and operate approximately 30 MW of hybrid power generation capacity to service the needs of the King of the Hills (KOTH) project in Western Australia.

The power inputs as part of the BOO agreement comprise high efficiency reciprocating gas fuel power generation together with a 2 MW photovoltaic solar farm (an example from Zenith’s other work shown above) and a battery energy storage system.

Power supply to the site is planned to commence in the March quarter of 2022 with an initial term of 10 years. The contract includes provision for a potential future upgrade to the power station to support increased plant throughput beyond the initial planned 4 Mt/y run rate, Red 5 says.

Gas will be supplied from the Goldfields Gas Pipeline, 12 km west of the mine, under separate contracts, the company clarified.

Red 5 Managing Director, Mark Williams, said the award of the agreement marked another important construction milestone for the King of the Hills project while, at the same time, helping to achieve one of the company’s environmental, social and governance commitments to reduce the carbon footprint of the project.

“We are pleased to have signed the Power Purchase Agreement with Zenith, an experienced power producer which provided us with a compelling hybrid thermal and sustainable power solution that includes renewable energy,” he said. “Zenith’s combination of a gas and solar power station, supported by a battery energy storage system, provides the efficiency and stability required for the processing plant and infrastructure to enable King of the Hills to be a long-life, low-cost gold producer.”

The KOTH project is an open pit and underground gold deposit with a projected mine life of over 16 years. This could see the company produce 176,000 oz/y of gold over the first six years, according to a recent feasibility study.