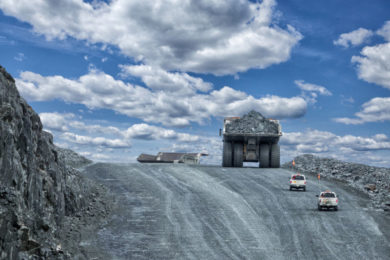 Kirkland Lake Gold Ltd’s newly filed 2021 Detour Lake Technical Report includes a new life-of-mine plan (2021 LOMP) for the operation in Ontario under which production is expected to average 680,000-720,000 oz from 2021-2024, before increasing to 800,000 oz in 2025. Production would then decline for three years during a period of increased stripping before reaching over 900,000 oz beginning in 2032. As the company continues its exploration drilling and works to factor the significant drilling success it is achieving into the 2022 LOMP, an important objective will be to achieve growth in reserves and changes to the production profile such that there is not a drop off in production after 2025, and to achieve 900,000 oz of production, or higher, as early in the mine life as possible, leading to further improvements in unit costs and free cash flow.

The project start date is January 1, 2021 with mining conducted over a period of 18 years and processing activities extending over 22 years, with the final three years of processing reflecting the milling previously stockpiled low-grade Mineral Reserves. Total capital expenditures for the project C$3,621 million over the LOM and C$1,510 million from 2021-2025, for an average over the first five years of C$302.0 million. Contributing to the level of capex in the first five years are a number of key projects, including C$65-75 million for projects aimed at increasing throughput in the mill from 23 Mt to 28 Mt per year. Capital expenditures for mining includes equipment replacement, planned component replacements, and capitalised maintenance of 795 haul trucks. Expenditures related to the tailings management areas (TMA) include construction of Cell 2 and Cell 3, while G&A costs are largely related to environmental permitting for the West Detour project and the Mine Water Pond.

The Detour Lake pit design incorporates a double ramp access for most of the LOM. The final ramp and principal access will be located in the north wall. The West Detour and North Pit were designed using a single ramp access. There are a total of nine phases designed for the LOM: five for the Detour Lake Main Pit, three for the West Detour Pit and one for North Pit. The mine production schedule forecasts a total 1,725 Mt to be mined over a period of 18 years (2021–2038). A total of 597 Mt of ore is planned to be milled over a period of 22 years (2021–2042); with the last four years of production supported by long-term stockpile reclaim. The optimised and variable cut-off strategy combined with 158 Mt of stockpile capacity, results in an average LOM stripping ratio of 1.90.

The Detour Lake Mine uses conventional truck-shovel open pit mining for the Main Pit. Mining at West Detour is planned to employ similar conventional mining methods with the initial use of smaller equipment for the pre-stripping phase, especially in overburden. Given the smaller dimensions of the North Pit, a smaller fleet size will be used. Both the new pits will start operation in 2023.

In more detail on the mining fleet, in 2021 the mine is currently using five 28 m3 Cat 6060 hydraulic shovels (three diesel, two electric, operating primarily in ore) and two 48 m3 Cat 7495 rope shovels (operating primarily in waste zones). A third 7495 will be added by 2024. The shovels are matched with a fleet of 313 t class Cat 795F AC electric drive trucks which currently stands at 36 but will increase to 54 by 2025. For the trucks, Kirkland Lake Gold currently has a maintenance and repair contract (MARC) agreement with Cat dealer Toromont for the CAT 795 truck fleet. The MARC consists of a variable sliding-scale hourly cost and a fixed overhead fee. The mine also operates seven Cat 777 trucks which will increase to 10. 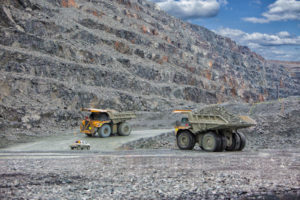 This fleet combination requires 5.5 passes for a hydraulic shovel and three to four passes for a rope shovel to fill a truck. The primary loading fleet is supplemented by two Cat 6030 excavators and Cat 992 and 993 front-end wheel loaders that are used for pit clean-up, ROM stockpile rehandle, TMA material rehandle and overburden stripping. Overburden mining is primarily be allocated to Cat 6060s for the Detour Lake Main Pit. The West Detour Pit and North Pit will primarily use the Cat 6030 fleet. The 6060 fleet will be the main loading unit when mining the West Detour pit. The Cat 6030s will be used for mining in the North Pit due to the better selectivity offered by the smaller bucket size and ability to mine in smaller benches.

The primary drill fleet at Detour Lake consists of four electric and four diesel Epiroc PV271, SmartROC D65s and DM45s drill rigs. Production drilling is performed primarily but not exclusively by PV271 drill rigs. The D65 and DM45 drills are mostly used for trim, pre-split and secondary drilling. The DM45 is the primary drill rig used for underground collapse and probe drilling. Dyno Nobel is the explosives supplier. The mine has been operating the Pit Vipers via teleremote but full automation is part of the plan. 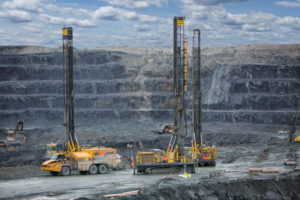 Interestingly, the mine has changed its bench strategy in 2020. The Detour Lake Mine has used a 12 m bench-height since operations commenced. A 6 m sub-bench was used to mine the areas requiring pioneering to improve operational conditions related to boulders and pinnacles of bedrock. Starting in mid-2020 the mine transited to a 14.5 m bench height for areas to be primarily mined by rope shovels and to 7.25 m benches in areas to be mined using hydraulic shovels. The revised mine design has led to improvements in shovel productivities. 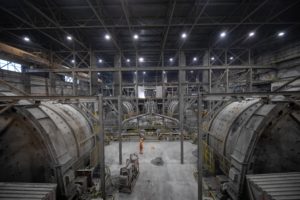