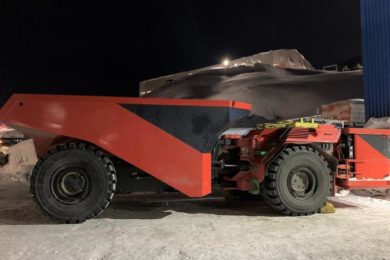 Pretivm Resources Inc is now at the start of a process to replace 13 diesel-powered 30 t payload underground haul trucks with battery electric zero emissions trucks at its Brucejack gold mine in northwestern British Columbia, Canada, approximately 65 km north of Stewart. For now, the plan is still at a trial stage, with one model under consideration being the 50 t class Z50 truck with self-swapping battery capability from Sandvik-owned Artisan Vehicles based in Camarillo, California. A unit recently arrived at the mine for testing.

The project is being partly funded thanks to a C$7.95 million investment from The CleanBC Industry Fund and is set to see emissions cut by 64,400 t CO2e through 2030. “By working together with government, Pretivm Resources has the opportunity to reduce emissions and build on our low-carbon advantage that the hydro-electric power grid provides,” said Jacques Perron, President and CEO, Pretivm Resources Inc. “Through the CleanBC Industry Fund, we have initiated the process to introduce battery-electric mine-haul trucks as a replacement for the diesel-fuelled fleet of trucks at the Brucejack Mine.”

The Province is taking action on climate change by setting sectoral greenhouse gas (GHG) targets to guide emission reductions, and supporting people working in BC industry and clean tech with investments in new projects to reduce emissions. Sectoral GHG targets have been established for 2030 in transportation, industry, oil and gas, and buildings and communities – expressed as a range of five percentage points. British Columbia is the first province in Canada to set sectoral targets covering emissions across the economy. As part of legislated requirements, government will review the targets by 2025, with options to expand the number of sectors included and narrow the percentage ranges.

The Province in all is investing C$33 million in 19 CleanBC Industry Fund projects. This will enable an additional multi-sectoral investment from industry of C$51 million in cleaner technology and energy efficiency. Combined, these investments are expected to eliminate 1.1 Mt of carbon dioxide equivalent over the next decade – roughly the same as taking approximately 390,000 cars off the road for a year.