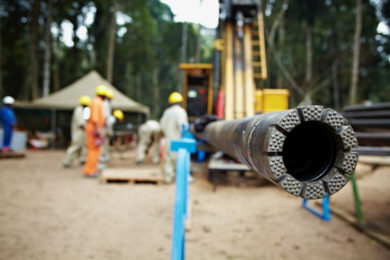 Kore Potash and Summit Africa Ltd, on behalf of a consortium of investors and engineering firms, have signed a non-binding memorandum of understanding (MoU) to arrange the total financing required for the construction of the Kola potash project in the Republic of Congo.

The MoU with Summit outlines a roadmap to optimise, fully finance and construct Kola via a mix of debt and royalty financing, it said.

Summit and its technical partners, SEPCO Electric Power Construction Corp and China ENFI Engineering Corp, who has been subcontracted by SEPCO, will work with Kore to undertake an optimisation study to reduce Kola’s capital cost with a target of less than $1.65 billion.

Kore, which owns 97% of Kola, will contribute around $900,000 to the optimisation study costs, with SEPCO covering the remaining 50% of the estimated study costs, it said.

Summit is an Africa-focused strategic advisory, corporate finance and alternative investment group headquartered in Mauritius who, in 2016, led and arranged the $50 million financing of the definitive feasibility study for Kola. As part of that financing, both the Oman Investment Authority (then called the State General Reserve Fund) and Sociedad Quimica y Minera de Chile (SQM) each invested $20 million.

Summit’s role in the MoU is to, again, be the lead arranger and to advise the company concerning the most optimal financing solution that would see the delivery of the Kola project, Kore said.

SEPCO will be the engineering procurement and construction contractor for Kola within the Summit consortium. ENFI’s potash-specific experience includes design and construction of an underground potash mine in Southeast Asia.

Summit, SEPCO and ENFI commenced discussions with the company towards financing the construction of Kola in the second half of 2019.

The MoU provides the Summit consortium with a nine-month period to present a financing proposal to fully finance the construction of Kola via a combination of debt and royalty financing. This means the company would not be required to raise equity to fund the capital cost of construction as the equity portion will be covered by the royalty funding with the company retaining its 90% interest in the project (the Republic of Congo Government receiving the remaining 10%).

The results of the definitive feasibility study for Kola were announced in January 2019. During its review of the DFS, the company and its independent consultants identified several opportunities to achieve a material reduction in the capital cost of Kola, but the realisation of these opportunities requires further capital optimisation studies, it said.

“Having already completed a preliminary review of the DFS and the potential optimisation opportunities identified, the technical partners in the Summit consortium (SEPCO and ENFI) have confirmed a target capital cost for the optimisation study of $1.65 billion,” Kore said. “Reducing the capital cost of Kola will reduce the size of the financing required for construction and improve returns for the company’s shareholders. The Summit consortium has set out in the MoU that achieving the target capital expenditure in the optimisation study is a condition for Kore to receive the financing proposal.”

Kola is a high grade, high quality, shallow sylvinite potash deposit situated on an existing mining licence, approximately 35 km from the coast, and 65 km north of the harbour city of Pointe Noire, Kore says. It comes with a 2.2 Mt/y muriate of potash production profile over a 33-year mine life.

The permitting and agreements required for construction are in place including the environmental permit, trans-shipment permit and the Mining Convention with the government.

Once in production, Kola is anticipated to be one of the lowest cost potash producers globally, ideally located to supply nearby African and South American markets, the company added.