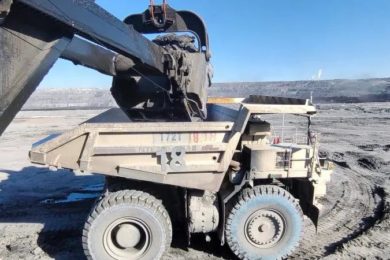 China’s Inner Mongolia North Hauler Joint Stock Co Ltd (NHL) now has two NTE200 AC electric drive trucks running autonomously as part of a trial at the Yiminhe coal mining operations of China Huaneng Group, also in Inner Mongolia. The 186 t class trucks are retrofits equipped with AHS technology from NHL partner TAGE Idriver. During a day shift on March 31, 2021, one of the unmanned truck drove at a speed of 20 km/h, transported 8 loads of 656 m3 in all, and successfully passed the first stage of the efficiency improvement target acceptance. The trucks are working  in the northern part  of Yiminhe coal mine.

In order to improve efficiency, NHL staff have been working to identify factors that would adversely affect the unmanned driving efficiency of the dump trucks, and formulated solutions to improve accuracy of the turning signals, monitoring of key component parameters and vehicle attitude positioning monitoring. Other issues resolved included developemnt of driving ruts, the shovel not automatically following the truck position, and the vehicle reaching the retaining wall without adaptive autonomous unloading. All of this work NHL says has continuously improved the stability and reliability of the vehicle. Up to now, the two unmanned dump trucks have completed the transportation of a total of 450 loads and 35,680 m3 of stripped overburden under a two-shift operation. 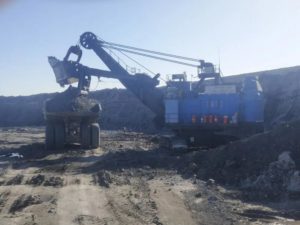 In April, unmanned vehicles have entered the second stage of efficiency improvement. A three-shift operation will also see an increase in the speed of vehicles to 30 km/h, with the goal to achieve the same work efficiency of a manual driven truck by the end of April. IM understands that Yiminhe mine is now also looking to invest in a fleet of “new” autonomous truck of either the NTE200 or larger NTE240 model.

In recent years, a large number of unmanned mining trucks from NHL including models TR100AT, NTE200AT, and NTE240AT have gone into mine testing operations as small fleets including at Baotou Steel’s Baiyun Obo iron ore mines,  the limestone quarries of Conch Group, China Huaneng’s Yiminhe coal mine as described, China Coal’s Pingshuo mine and other operations, with a new fleet recently completed and set to be commissioned at SPIC’s Huolinhe coal mine, which will include 10 NTE240 units.

In 2021, NHL says it will continue to work closely with various mining companies, contractors and others to further improve the operating efficiency of its unmanned mining vehicles. At the same time, it is actively promotes the formulation of industry standards in China for unmanned mining trucks, some of which have been officially announced and implemented.