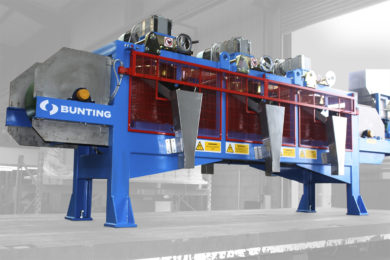 A Nigerian mineral processor is installing two Bunting Magnetic Disc Separators (MDS) to separate individual minerals in a coltan plant. Coltan or columbite-tantalite is a black metallic ore from which the elements niobium and tantalum are extracted. Tantalum is extracted from tantalite for capacitors used in mobile phones, personal computers, and electronics. Columbite is a source of niobium, which is used in superconducting materials as well as in the nuclear, electronics, optics, and electronics sectors.

This latest export project Bunting says reflect its position as a recognised global leader for the design, manufacture, and supply of high-intensity magnetic separators for mineral processing. The Bunting European manufacturing facilities are in Redditch, just outside Birmingham, in the UK.

Bunting says the design of its Magnetic Disc Separator is widely regarded as one of the best in the world. “The origins of the Magnetic Disc Separator date back to the early 1900s, with subsequent design improvements following advances in material and manufacturing technology. Since the mid-1980s, Bunting’s design engineers further improved the design, providing greater magnetic strength and unrivalled flexibility for improved levels of mineral separation.”

In operation, an even layer of approximately 500 kg/hour of coltan raw mineral feeds via a vibratory feeder onto the Magnetic Disc Separator’s 375 mm wide belt. The monolayer of material initially passes under a permanent ferrite Plate Magnet, suspended at 75 mm above the belt, which captures strongly magnetic particles. The coltan then feeds under a series of three individual spinning high-intensity electromagnetic discs, each generating different magnetic field intensities and positioned at an increasingly lower suspension height above the conveyor. The magnetic intensity of each electromagnetic disc increases along the length of the conveyor, starting at approximately 10,000 Gauss (1 Tesla) and ending with 23,000 Gauss (2.3 Tesla).

As the coltan mineral mix passes under the rotating magnetic disc, magnetically susceptible particles lift and deposit into a discharge chute to the side of the conveyor. Each magnetic disc stage focuses on a particular magnetic mineral including tantalite, tin, and columbite.

“Our superior Magnetic Disc Separator design is exceptionally popular with coltan processors due to the ability to vary the magnetic field and the manufacturing quality,” explained Adrian Coleman, the General Manager of Bunting-Redditch. “This latest project is particularly important, resulting from seeing our equipment successfully working in another coltan installation. The perfect recommendation.”