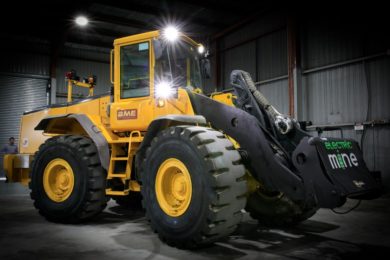 A major new partnership has been agreed between 3ME Technology and Batt Mobile Equipment (BME) which will play an important role in helping to electrify Australia’s mining industry. The ~A$140 million deal will see 3ME Technology supply Batt Mobile Equipment (BME) upwards of 150 Electric Vehicle Engine packages over the next five years to power BME’s 20 t Integrated Tool Carrier BEV retrofits.

The deal is based on the successful TRITEV project which is proving the concept of retrofitting larger tonnage diesel mining equipment to battery electric. An ‘IT’ (Integrated Tool-Carrier, Loader) was selected due to its common use in underground mines for roof-work (basket attachment) and stores movement (fork attachment).

The EV Engine Package includes 3ME Technology’s proprietary Bladevolt Battery System and the company’s Vehicle Control Unit (VCU) Software Package. This software package, developed by 3ME to ensure minimal change to operator experience, ties together high-quality EV components to form an EV system capable of meeting or exceeding the duty cycle of the diesel variant.

The contract formalises the 3ME Technology/BME relationship after an intense period of R&D that has been supported by METS Ignited under Project EVMine. The prototype platform, which utilises the chassis of a Volvo 120 series Integrated Tool Carrier, was successfully trialled by Aeris Resources at their Tritton Copper Mine. Steve Lawn, Chief Growth Officer at 3ME Tech, told IM that with multiple players in the industry watching the trial, BME are now under heavy demand to supply the 100% battery electric platform into the Australian mining industry.