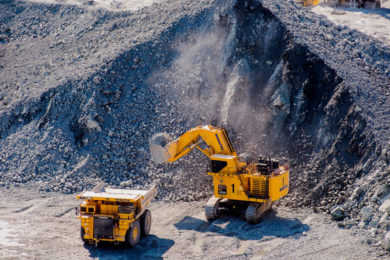 Mining LNG retrofit leader GFS Corp says it has developed the first LNG conversion for large mining shovels with its latest product offering, the EVO-MT® 4000-6 for the 22 m3 payload Komatsu PC4000-6 shovel. The first of these systems is being commissioned at Russian Copper Company’s Mikheevskiy mine this year, where GFS has already retrofitted a fleet of 12 186 t 730E mining trucks to run on dual fuel LNG and diesel.

The EVO-MT® System enables operators of Komatsu PC4000-6 mining excavators to substantially reduce operational costs and improve sustainability by substituting diesel fuel with lower cost, cleaner burning natural gas. The EVO-MT® System is comprised of patented and proprietary technologies that allow haul trucks and other larger mining equipment to safely operate on gas percentages that represent a substantial portion of their total fuel requirement. The EVO-MT® System has been designed around an LNG on-board storage capacity equivalent to approximately 50% of the normal diesel fuel consumed over a single shift of operation. “Diesel Displacement Rate (DDR) will vary according to the specific engine load profiles. Typically DDR’s of between 35% and 50% are seen. Equipment converted to LNG + diesel operation exhibit diesel-like performance in such critical areas as power, response and efficiency.” 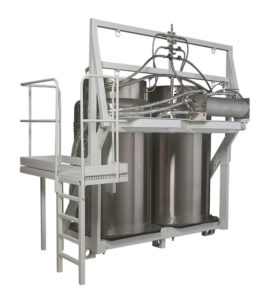 LNG is safely and securely stored onboard the mining excavator using a fully-integrated chassis system mounted to the upper deck/top of the counter weight. The LNG storage “module” includes two, double walled, vacuum insulated 300 US Gallon (usable) cryogenic tanks, LNG vaporizer and cryogenic safety controls and sensors. The module is a fully-engineered, pre-fabricated assembly that significantly minimises the required installation down-time of the excavator. Modules are shipped to the mine site completely assembled and tested and can be installed using a crane. The LNG moduled is designed specifically for the Komatsu PC40000-6 excavator and carries sufficient LNG storage capacity for a 12 hour refuelling cycle. Installation of the fuel storage module and other non-engine related equipment will typically require 1 to 2 shifts to complete.

Gas is delivered from the vaporiser to a gas train located on the excavator’s upper deck and housed in a specially designed housing to protect it. Included are a high pressure regulator, low pressure regulator and solenoid valve as well as safety controls and sensors.

The EVO-MT® System allows for the in-frame conversion of the excavator engine to LNG+D operation. The conversion process utilises components that are installed externally of the engine and no changes or modifications to the cylinders, pistons, fuel injectors or cylinder heads are required. Retaining the OEM diesel fuel system in its entirety, the engine maintains the capability to operate solely on diesel fuel when required. The System interfaces with the engine cooling circuit in order to supply high temperature coolant to a heat exchanger/vaporiser for efficient conversion of the LNG from a liquid to a vapor state. Once the LNG is converted to a vapour phase, it is supplied to the engine’s air-intake system at a point upstream of the turbo-compressor inlets using low restriction air-gas mixing technology. Installation is performed using conventional shop tools and equipment and requires approximately one shift to complete.

Every EVO-MT® System is equipped with GFS Corp’s proprietary telematics system, EVO Connect®. EVO Connect provides near real-time engine and system data via a web portal or a proprietary Apple iPad application. System status and fault codes allow users to diagnose system problems remotely so technicians are prepared before getting access to the excavator.

The GUI allows for quick and simple access to both real time system data using a proprietary graphical user interface (GUI) program. The GUI program is PC compatible and technical personnel can access system data using a convenient USB interface located in the operator cab. In addition to accessing system data, the GUI program is utilised during setup and commissioning of the excavator for creation or loading of fuel mapping algorithms as well as for programming various system controls, pre-alarm and alarm setpoints.