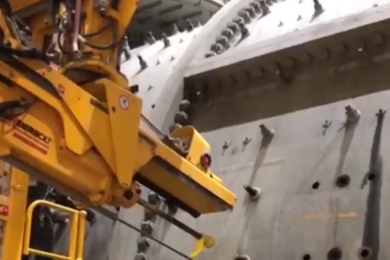 THUNDERBOLT SKYWAY is an innovative new semi-automated suspension, guidance and firing system for THUNDERBOLT Recoilless Hammers – including MAGNUM, from Australia’s Russell Mineral Equipment (RME). These hammers are used for worn grinding mill liner bolt removal, an intensive process commonly referred to by the industry as ‘knocking-in.’ These difficult-to-dislodge bolts are part of the mechanism that secure the mill liners to the internal shell of the mill. Traditionally, reline crews would manually guide recoilless hammers into position on the outside of the mill, fire, manually move to the next bolt and repeat. However, with SKYWAY, hammers are suspended from a gantry system that is contoured to the shape of the mill, guided into position and fired by remote control. Following the recent successful application of the system on a customer SAG mill, IM Editor, Dan Gleeson, got the lowdown on the technology and its potential from RME.

Q Could you spell out what elements of the relining process are automated and what elements still require personnel to make up the semi-automated offering?

Q Will customers be able to adapt their existing mill maintenance set-up to accomodate the new system?

RME has engineered the system to feature standardised interfaces – hammer models are interchangeable – for both practical purposes and reduced total cost of ownership (TCO). RME customers will be able to use SKYWAY in conjunction with their existing THUNDERBOLT Recoilless Hammer assets. Additionally, SKYWAY customers will also be able to upgrade to the latest, and more powerful, THUNDERBOLT MAGNUM technology without major modification to their SKYWAY installation.

Q What size SAG mill was this semi-automated relining process carried out on? How long did the process take and was this in line with your/the client’s expectations? When is the next project?

It was done on a 40’x 26’-8’’ mill. The total time to reline took approximately 97 hours which is significantly faster than previous recorded reline times of 120 hours. This substantial reduction in time to reline and subsequent total shutdown time is due to the efficiencies RME’s THUNDERBOLT SKYWAY provides. Knock in of bolts and liners averaged approximately 45 minutes. The next THUNDERBOLT SKYWAY reline is expected to be in June at a copper mine in North America.

Q Would you say the relining process you took for this mill is widely representative of the process you would carry out during other mill relinings? How much ‘customisation’ is involved from one relining to the next?

RME’s mill relining solutions are transforming the way our customers reline to deliver greater safety, predictability and profitability. The overwhelming response from the market is representative of the direction RME’s technology is taking. Transforming the way our customers reline and at the same time, significantly reducing mill shutdown times for mining companies across the globe. RME is pioneering the shift from manual to automated mill relining in mining. In short, yes it is representative of an approach that can be applied industry-wide. RME’s mill relining technology solutions are customised to fit individual mill specifications. Each piece of mill relining technology is made by our specialist engineers at our Toowoomba headquarters and shipped to mine sites all over the world.

Q Can you go into more detail on the key benefits of THUNDERBOLT SKYWAY?

This automation delivers three key benefits. The first is safety. SKYWAY eliminates the need to manually handle and manoeuvre heavyweight liner removal tools around the mill deck where personnel are exposed to hazards such as suspended loads, slips, trips and falls. Instead, an operator pilots the liner removal tool using a remote control from the safety of an operator pod. In fact SKWAY complements an advanced suite of RME INSIDEOUT Technology solutions. These technologies not only facilitate faster relining, but they remove people from risk inside and outside the mill – a safety world-first. Second is speed. SKYWAY reduces the time required to knock-in bolts and liners compared to conventional methods. This is due to the efficiency of hammer’s path, and the higher-than-human-reach of the system. This higher reach reduces the number of mill inching movements required (a time-consuming process) and hence inching time per reline. Third is reline consistency and predictability. The reason for this is that even skilled human operators have a high degree of variability across individual reline activities. This variability contributes to unpredictability. SKYWAY overcomes these challenges by creating optimally efficient travel paths (ie reduces the average standard deviation compared to manual hammer handling) for the hammer as it moves from bolt-to-bolt. Finally, even greater safety, speed and duration predictability benefits can be achieved when THUNDERBOLT SKYWAY is integrated with RME’s RUSSELL 7 Model U AutoMotion Mill Relining Machine – the world’s first robotic mill relining machine.

Q What has the process taught you about the potential to fully automate the process? Will it be possible in the future? What hurdles need to be overcome?

As more and more mining companies around the world continue to adopt RME technologies and services, we are able to accelerate the impact our technologies have on our customers relines. Increasingly, more and more mining companies want to be part of the critical transition from manual mill relines to the automated relining practices RME’s technologies provide. At RME, we believe true innovation in mill relining and transformation of mill relining outcomes isn’t limited to a moment in time, but will continue to impact the industry for many years to come. Together with our customers, we’re realising the safety and performance benefits of our advanced technologies, and fulfilling our Mission Statement: to visibly, defensibly and sustainably improve our customers’ concentrator performance.

Q Where does the THUNDERBOLT MAGNUM Recoilless Hammer fit into your SKYWAY plans? I understand you have already sent one of these to an Australian copper/gold mine: has this already been used?

THUNDERBOLT MAGNUM technology seamlessly integrates with THUNDERBOLT SKYWAY. Due to the undeniable impact it has on increasing productivity and decreasing shutdown times for our mining customers, it is expected to become an essential element of THUNDERBOLT SKYWAY implementations moving forward. The THUNDERBOLT MAGNUM Recoilless Hammer was used in Australia recently with outstanding results due to the extremely high hitting capacity and accuracy it provides.