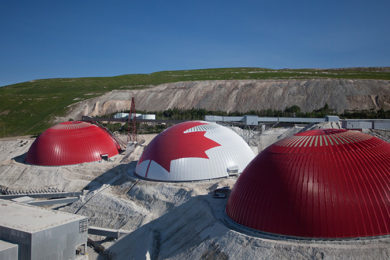 Teck’s RACE21™ innovation-driven efficiency program covers many bases. On the autonomy side, the company is making major strides which was outlined in its recent Q1 2021 earnings call. Teck is somewhat unique in the industry in having deployed AHS at both coal and metallic operations and is using two different systems – at the Elkview Operations steelmaking coal complex in BC it has a fleet of Komatsu 930E autonomous trucks, combined with the network power of a new private LTE system from Shaw and Nokia. At Highland Valley Copper (HVC), also in BC, the company uses Cat Command for hauling with a fleet of 793F CMD trucks. 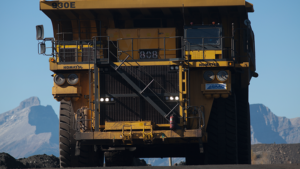 Shehzad Bharmal, SVP, Base Metals, North America & Peru said on the call that at Highland Valley Copper it has now converted 21 trucks to autonomy with the plan is to have 35 trucks fully autonomous by Q1 of 2022. The trucks which will run unmanned in both the Valley and Lornex pits. “In terms of the performance of AHS is performing as designed, as expected. And we are doing cash flow to see longer-term benefits associated with higher life maintenance and fuel savings, which were on top of our expected benefits for AHS of utilisation and labour issues. And of course, safety being one of the best things we have had really no issues on the safety front. It has performed really well.”

Robin Sheremeta SVP, Coal added that Teck has now got about half the 930E truck fleet converted at Elkview, so currently the same as at HVC – 21 trucks. He says Elkview will have the fleet fully converted by the end of the year and is seeing very similar safety and maintenance type improvements to HVC.

Moving to Teck’s climate change strategy, where it aims to be a carbon neutral operator by 2050, in its 2020 Sustainability Report, the company refers to its successful conclusion of its pilot project of two electric passenger buses for crew transportation at its steelmaking coal operations. In the 12-month trial, the 40-passenger eLion buses replaced diesel crew transport buses at both the Fording River and Greenhills Operations in the Elk Valley. The GHG reduction of each bus is the equivalent of removing more than 15 combustion engine cars from the road. Teck also refers to testing of an all electric concentrate hauler to be operated by its service providers at Highland Valley Copper. It also trialled an electric MacLean boom truck at HVC. 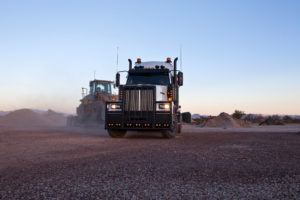 Specifically on the copper concentrate hauler, this is to be based on a Western Star 4900 tractor converted to battery electric operation by MEDATech using its ALTDRIVE technology, with funding partly from the CleanBC Industry Fund. The technology has already been proven in testing by MEDATech at a quarry in Quebec. The converted 4900 tractor will use a fifth wheel arrangement to haul approximately 40 t of concentrate in a trailer on-highway from the plant operations 44 km to the CN Ashcroft rail terminal. There are 16 km of steep downhill for regeneration. The plan is to do the charging at the CN terminal and at Highland Valley Copper Operations. For now the single unit will run in a pilot test which will dictate any future decision around further implementation.