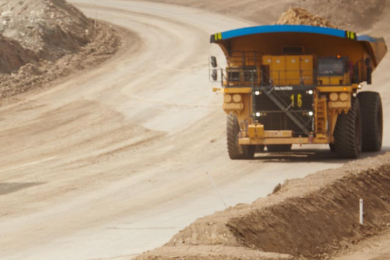 The BHP Mitsubishi Alliance (BMA) JV autonomous haulage team has just delivered another Australian mining innovation step with the first material loaded into retrofitted Komatsu 930E-5 autonomous trucks at Goonyella Riverside coking coal mine in central Queensland’s Bowen Basin, using a Komatsu P&H 4100 electric rope shovel. The mine autonomy transition plan contemplates an eventual autonomous fleet of up to 86 Komatsu trucks achieved in a phased roll out over 2021/2022 which is slightly delayed from the original plans due to the pandemic.

As at other BHP autonomous fleet sites like Jimblebar, part of WAIO, autonomous haulage is expected to create a more productive but also safer work environment including ~80% expected less significant truck events and a similar reduction in injuries and illnesses related to load and haul operations. In particular it reduces the likelihood of haul truck/light–vehicle incidents by minimising human factors (eg fatigue, impairment), reducing exposure to driving related hazards by removing the requirement for operated haul trucks in the majority of operating environments and introducing technology to monitor and control unexpected behaviour.

In a company presentation released when the automation plans were first unveiled in 2019, BMA said it had the “potential to build on already strong production performance with increased truck hours and rate over time, enabling productivity improvements and a reduction in haulage cost,” adding that it also had to potential “to set ourselves up for the long term with technology that will further enhance our sustainability and competitiveness.”