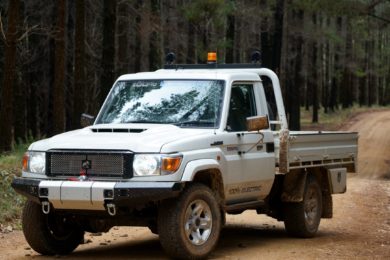 VivoPower International PLC has announced that the company and its wholly-owned subsidiary, Tembo e-LV BV, have entered into a non-binding Heads of Terms with Canadian industrial equipment distributor Acces Industriel Mining Inc for Acces to distribute Tembo electric light vehicles (e-LVs) in Canada. Under the proposed agreement, Acces would commit to purchase 1,675 Tembo e-LV conversion kits through December 2026.

The Tembo kits transform diesel-powered Toyota Land Cruiser and Hilux vehicles into ruggedised e-LVs for use in mining and other hard-to-decarbonise sectors, including construction and defence. Alongside solar generation, battery storage and on-site power distribution, Tembo e-LV products are a key component of VivoPower’s turnkey net-zero solutions for corporate decarbonisation.

The Proposed Agreement follows January’s distribution agreement with GB Auto Group Pty Limited and GB Electric Vehicles Pty Ltd. Discussions with other distributors are also active and ongoing across Europe, Africa, the Middle East, the Americas and Asia. VivoPower is targeting the completion of its global Tembo distribution network by December 2021.

VivoPower selected Acces as the company’s distribution partner in Canada because of Acces’s established, long-term experience supplying, ruggedising and servicing Toyota Land Cruisers, as well as its extensive active relationships with dozens of mining companies which make Acces the foremost player in Canada’s mining segment.

Kevin Chin, Executive Chairman and CEO of VivoPower, said: “We have been in dialogue with Acces for over six months, and in that time both of us have witnessed first-hand the significant increase in demand for net-zero carbon solutions in hard to decarbonise sectors, especially the mining industry. We are delighted that Acces intend to select Tembo as the preferred electric vehicle solution for their customers over others available in the market. For VivoPower, this Proposed Agreement would be significant, as it would provide us with the launchpad to deliver our sustainable energy solutions into Canada, one of the largest mining markets in the world. Acces is a leading and trusted provider to the Canadian mining industry, amongst other sectors, and we have every confidence that they are the right partner for us in the Canadian market.”

Jean Dion, CEO of Acces, commented: “Having evaluated the alternatives we had no hesitation in signing this arrangement with VivoPower. In our opinion the Tembo product is clearly exceptional and Acces will not be distributing any competitive product for the five years of the agreement. We are in constant dialogue with our mining, forestry, industrial and construction customers and know how quickly demand is building for solutions which can help deliver net-zero carbon emissions.”

Under the Proposed Agreement, it is intended that Acces would commit to purchase the 1,675 kits from VivoPower as scheduled over the duration of the agreement, acquire an equal number of Land Cruisers or Hilux from Toyota, convert the vehicles to ruggedised e-LVs using the Tembo solutions, sell the units on and be retained by customers for servicing and maintenance. VivoPower and Acces intend to finalise the Proposed Agreement as soon as practicable.