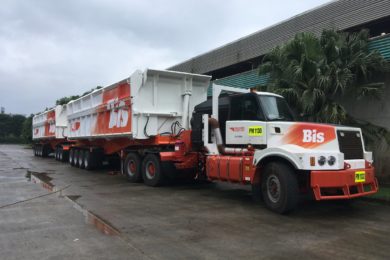 The system collects, analyses and reports driver behaviours such as drowsiness, mobile phone use, smartwatch use, smoking, seatbelt and other violations. Trifecta then ‘learns’ over time to pre-empt high risk incidents in real-time through alerts to drivers and supervisors. As part of a collaborative relationship with EDGE3, a world leader in driver monitoring and occupant behaviour analysis, Bis successfully pioneered the software in its own operations over the last three years, and is now making the product available to its customers and peers.

It has exclusive rights to use and sell the system across a range of markets, with the immediate focus being on opportunities in Australia and South East Asia. Trifecta has been rolled out to nearly 200 assets across Bis’ Australian and Indonesian based fleet and has significantly improved the volume of in-cabin data processed by the dedicated Bis control centre.

Bis Chief Executive Officer, Brad Rogers, said the safety outcomes it has generated speak for themselves. “Since Trifecta’s deployment across our fleet, driver infractions have decreased precipitously. Incident rates involving smoking breaches whilst driving and system tampering have decreased to zero, as have seatbelt breaches. Instances of mobile phone distractions have consistently trended downwards in the region of 80%. In FY2020, Trifecta analysed over 2,000 hours of footage per day, which represents an efficiency increase of 1450% compared to our previous monitoring operations.”

“We are proud to be deploying this important technology into our operations. The in-cabin environment is a high risk area of our operations, so using AI to promote better standards in driver safety and wellbeing is a genuine game-changer. Trifecta represents the gold standard for driver behaviour monitoring and is the latest innovation we have collaborated on to make our operations the safest they can possibly be. The partnership blends our deep operational insights with EDGE3’s bleeding-edge Vision AI offerings to deploy a system that is insightful and usable by Bis and other participants in the resources sector, in addition to broader logistics and fleet applications.”

EDGE3 Founder and CEO, Tarek El Dokor said: “Since its founding, EDGE3’s goal has been to mitigate distracted and drowsy driver behaviours via a new generation of product offerings for in-cabin technologies. EDGE3’s Vision AI capabilities and product offerings represent the future of in-cabin analytics across the industry. Accurate AI understanding of positive and risky driver and occupant behaviours is the cornerstone for enhancing safety. By involving operators in a positive manner, we can consistently improve the in-cabin experience. We are delighted to work closely with Bis. We have had a great relationship for a number of years and look forward to its continued growth.”