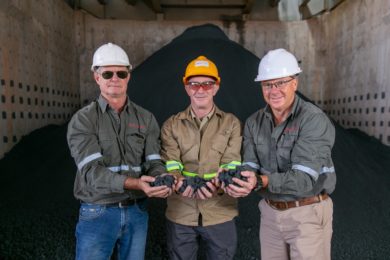 Ivanhoe Mines has announced the start of copper concentrate production at the Phase 1, 3.8 Mt/y Kamoa-Kakula copper mine in the Democratic Republic of the Congo, several months ahead of schedule.

First ore was introduced into the concentrator plant on May 20 to perform initial hot commissioning tests on the ball mills and other processing equipment. The initial mill feed grade reached approximately 4% Cu shortly after start-up.

As of May 25, 5-6% Cu ore was being conveyed directly from Kakula’s underground mining operations to the run-of-mine stockpile and the concentrator. Based on extensive test work, the concentrator is expected to produce a very high-grade, clean concentrate grading approximately 57% Cu, with extremely low arsenic levels, the company says.

Robert Friedland, Ivanhoe Mines Co-Chairman, said: “This is a historic moment for Ivanhoe Mines and the Democratic Republic of Congo. Discovering and delivering a copper province of this scale, grade and outstanding environmental, social and governance credentials, ahead of schedule and on budget, is a unicorn in the copper mining business. This accomplishment reflects the outstanding cooperation of thousands of individuals, and all of our joint-venture partners at Kamoa-Kakula.”

He added: “Although this exploration journey started well over two decades ago, it also is noteworthy that the Kakula deposit itself was discovered a little over five years ago, which is remarkable progress by the mining industry’s glacial standards from first drill hole to a new major mining operation.”

The initiation of production puts Ivanhoe on the path to establish Kamoa-Kakula as the second largest copper mining complex in the world, according to Friedland.

“What really excites our geologists is the profound potential to find additional Kamoa-Kakula-like copper discoveries on our massive Western Foreland exploration licences right next door, in an identical geologic setting,” he said.

Co-Chairman, Miles Sun, added: “The inception of Phase 1 is the birth of a copper complex that will benefit generations to come, and we very much look forward to the upcoming phases of expansion and exploration opportunities.

“Huge congratulations to the entire Ivanhoe Mines team and a roaring applause to all the hard-working suppliers and contractors for collectively completing this mammoth undertaking!”

Based on independent benchmarking, the project’s phased expansion scenario to 19 Mt/y would position Kamoa-Kakula as the world’s second-largest copper mining complex, with peak annual copper production of more than 800,000 t.

Given the current copper price environment, Ivanhoe and its partner Zijin are exploring the acceleration of the Kamoa-Kakula Phase 3 concentrator expansion from 7.6 Mt/y to 11.4 Mt/y, which may be fed from expanded mining operations at Kansoko, or new mining areas at Kamoa North (including the Bonanza Zone) and Kakula West.

The Kamoa-Kakula copper project is a joint venture between Ivanhoe Mines (39.6%), Zijin Mining Group (39.6%), Crystal River Global Ltd (0.8%) and the Government of the Democratic Republic of Congo (20%).

Alongside this announcement, the company confirmed that Kamoa Copper had appointed Société Générale de Surveillance (SGS) CONGO SA, an accredited laboratory service provider, for on-site analytical services. SGS is one of the world’s leading inspection, verification, testing and certification companies. The new assay laboratory is equipped with state-of-the-art equipment.

Results for various mine, exploration and processing sample types will be reported using a wide range of analytical techniques that are specifically selected to provide accurate and precise results within the time required to efficiently control concentrator and mine processes.

The high-grade copper samples will be analysed using the classical iodide titration method, which provides good accuracy and precision that is required for the dispatch samples, the company said. Convenient and flexible potentiometric auto titrators provide efficient and accurate results that are fully traceable to international methods and standards.