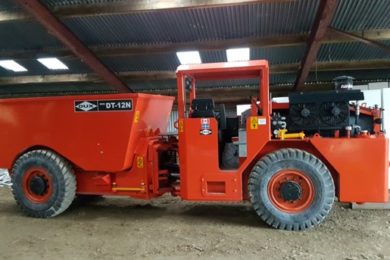 Scotgold, as it looks to further enhance safe production at its Cononish gold-silver mine in Scotland, has added another DUX underground truck to its fleet.

The second DUX truck at Cononish is a DT-12N, a narrow vein version of the DT-12 produced by DUX that measures 1,625 mm wide, has an 11 t payload and a 6 cu.m capacity. The first DT-12N has been operating at the mine for some time.

In the company’s announcement on June 1, it said the mine has been producing both gold concentrate and gravity separated gold dore, following the resolution of various outstanding technical issues affecting the processing plant earlier in the year. The first shipment of concentrate was made on May 11, 2021, achieving a major milestone for the company. The mine poured first gold back in December 2020.

“We shipped 25 t of concentrate at an average of 182.4 g/t of gold, exceeding the target of 150 g/t, achieving maximum price within the agreed terms within the offtake agreement,” the company said. “Modest amounts of gravity gold dore was also produced and sent to refiners this month for further treatment.”

Scotgold said it is encouraged with the mine and process plant performance, although performance had been intermittent to date.

“On given days throughout April and May, both the mine and process plant have been achieving near design rates of production,” it said. “The company is also pleased with the quality of ore that has been mined and produced through the process plant.”

Scotgold says its focus is to further enhance safe production through consistency and stability of mine and process plant operations in parallel with the opening of multiple faces of ore in the underground mine itself.

“The current limited available number of ore faces does limit our immediate ability to focus on the highest-grade ore zones of the Cononish orebody,” it explained. “Having proved that the mine and processing plant can operate as designed, our focus is on reducing outages through more efficient management of spares and having further redundancy in our mining mobile fleet with the arrival of the second haulage DUX truck.”

This new DUX truck will be complemented by an existing fleet that includes an Epiroc T1D single-boom face drilling rig and Epiroc ST2G Scooptram LHD.

When ramped up, Cononish is expected to average annual gold production of 23,370 oz over a nine-year life of mine.