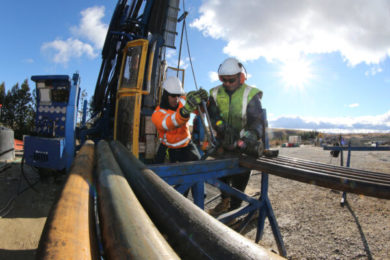 A snapshot of mineral exploration drill rig use in major mining regions globally has revealed Australia, USA and parts of South America are nearing capacity, as the surge in exploration continues unabated, IMDEX reports.

In a market update ahead of a presentation to the Macquarie Emerging Leaders Conference, IMDEX said rig utilisation in Australia was “nearing capacity” at 79%, and 72% in North America.

IMDEX Chief Executive Officer Paul House said the company was able to produce the snapshot because of its global presence in major mining regions, adding that global rig utilisation had only just returned to or exceeded pre-COVID 19 levels.

Activity in Canada would be significantly higher in the northern summer drilling season, House explained, while certain parts of South America were at high capacity percentages.

In regions nearing capacity, delivery times for new rigs had increased and labour shortages were adding to the pressure, according to the survey.

“We believe the industry is willing to invest and spend but may not be able to move as fast as it would like,” House said. “The industry drivers of depleted reserves, strong commodity pricing and the trend towards decarbonisation, are driving substantially increased industry exploration budgets.

“However, delivery against these targets will require time and investment in labour, drilling rigs, and other supply chain pressures that are a current constraint.”

He added: “When S+P says exploration will grow by 15-20% in a year and we see that the areas that are most active are running at maximum rig utilisation, and we know the lead time for new rig orders has blown out to nine or 10 months, we believe that increase won’t happen in that timeframe.

“A lack of rigs places even more importance on using the best technology to drill more metres with the rigs that are available.”

House said the long-term outlook for mining technology was strong.

IMDEX was positioned to benefit from increasing demand for digital operations and real-time orebody knowledge, with a strong core business and strategy to outperform industry growth, he said.