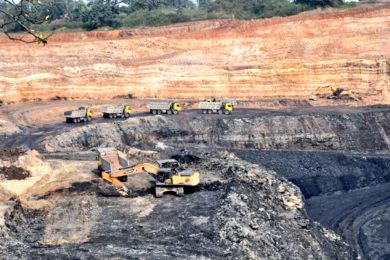 Power Mech Projects Ltd, one of India’s leading industrial services and construction companies, its says “providing versatile and comprehensive services in power and infrastructure sectors,” has been awarded a major new Mine Development & Operation (MDO) contract from Central Coalfields Ltd (CCL),a subsidiary of Coal India Ltd, worth INR 9,294 Crores (equivalent to over $1.25 billion) in the 25 year contract period. It is for the greenfield Kotre Basantpur Panchmo mine.

The MDO contract will primarily comprise mine infrastructure development, removal of overburden and extraction of coking coal, plus processing, crushing and transportation of coal up to the washery of CCL, carrying out R&R activities and any other activities incidental to mining as per the project document at Kotre Basantpur Pachmo OCP located in Ramgarh and Bokaro Districts, Jharkhand. The project has total coal extraction capacity of approximately 105 Mt with an annual capacity of 5 Mt and overburden removal during the project period is over 539 Mbcm. The concession period is 25 years including two years of development with an option of extending the contract for a period of another 10 years with the consent of both the parties (with this the total contract period will extend up to 35 years).

The project has been awarded to a consortium of Power Mech Projects and AMR India Ltd wherein Power Mech is the consortium leader with a 74% equity stake and AMR India will hold 26% stake. A Special Purpose Vehicle (SPV) called KBP Mining Private Ltd has been formed to undertake the project. AMR India, a two decades old company, has also been engaged in contract mining involving operations like removal of overburden, mining of coal/lignite, logistics etc. The SPV will have the material handling expertise of Power Mech in project development and the technical expertise of AMR India in the field of greenfield mining project development.

Commenting on the project award, Sajja Kishore Babu, Power Mech Chairman and Managing Director said: “Power Mech Projects Ltd has been a leading player in the infrastructure sector and has developed an expertise in projects of this scale and magnitude. This project is a strategic step forward in the company’s journey, utilising the technical know-how and further establishing the company’s position. The material handling expertise of the company in project development combined with the technical expertise of AMR in the field of greenfield mining project development, will greatly help in the overall development of the project which will result in achieving of the targets given by Coal Mining and Service Agreement. Mine Development Operations requires a robust decentralised team that needs to be on its foot all the time. The company has facilitated this by forming a separate Strategic Business Unit and by setting up a regional mining headquarters in Ranchi, Jharkhand with minimum reliance on the HQ.”

He concluded: “This project will strengthen the already robust order book even further and enable the company to diversify its order book which is in line with its strategy to have an optimum mix between power and non-power segments. Once operational, the project will add more than INR400 crores annually to our top line. With the revenue coming in from the O&M business and this MDO project, we expect to witness sustainable revenue with higher margins in the future for longer periods.”