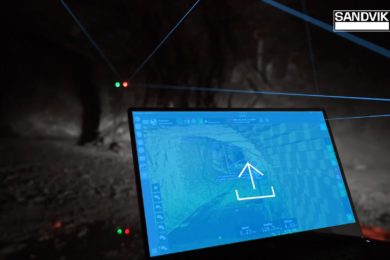 “Exyn offers a full-stack solution that enables flexible deployment of single or multi-robots that can intelligently navigate and dynamically adapt to complex environments in real time,” it explained.

Nader Elm, CEO and Co-Founder of Exyn Technologies, said: “We’re proud to expand our worldwide footprint with this partnership by empowering surveyors with a suite of highly accurate cavity monitoring tools. More Aeros & Paks in the field means more safety for mine workers in Canada and beyond.”

The thematic synergy of the partnership can be seen in the prioritisation of safety and efficiency from both companies, they said.

NSS Canada provides tools and solutions, such as MOSS (Miner Operated Survey System), to ensure underground procedures can be done safer, faster and with more accuracy. ExynAero autonomous drones, meanwhile, allow data to be collected without humans subjecting themselves to potentially hazardous locations and situations.

“The partnership allows mining customers to benefit from comprehensive underground aerial 3D mapping with progressive visualisation that increases overall transparency of mining operations – including for GPS-denied, hard-to-reach, or hazardous areas, or locations that would be time-consuming to survey and inspect using conventional methods,” the companies said.

Bruno Lalonde, President, NSS Canada: “NSS Canada believes in the rapid adoption of cutting-edge technologies that can revolutionise the mining industry by increasing safety, speed, and accuracy. Exyn Technologies is a pioneer in the industrial drone space, whose autonomous drone technology reduces the possibility of human error in potentially dangerous environments. Our mutual dedication to safety and innovation through technology is why we believe this is the perfect partnership!”