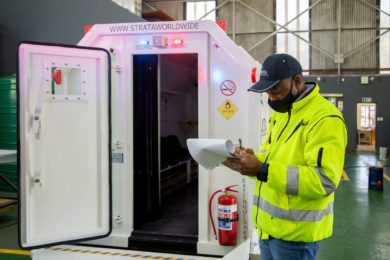 On May 28, Strata Worldwide – South Africa performed the final inspection and official sign-off of the first locally built Strata ERCX chambers. The steel-sided emergency walk-in units are Strata’s next generation in hard rock mining chambers, units which can also be configured for coal mines and tunnelling operations.

Initially released in May 2020, the ERCX is the evolutionary successor to one of Strata’s first refuge chambers introduced more than a decade ago. The new unit “is a truly global design and aids Strata’s worldwide manufacturers in building the chambers exactly to specification and tailoring them to meet local standards.”

“Strata’s chambers are built for emergency preparedness,” states Strata Worldwide -South Africa Product Manager Tom Long. “If an event occurs and the air in the working section becomes compromised, such as a fire outbreak or ventilation loss, the chambers are the fastest source of long-term breathing air that is isolated from the contaminated atmosphere.”

These first South African-built 12-person chambers were produced by steel fabricator Jewll Industries of Jet Park. “Strata and Jewll have been partners in business for over a decade, and we have worked together on numerous Strata products. As usual, we are very happy with the outcome of this project and very pleased with the quality of the chambers,” states Ian Cillie, Managing Director of Strata Worldwide-South Africa.

Now on their way to a gold mine in a neighbouring country, these Strata ERCX units will be connected to the mine’s main power and compressed air sources and are equipped with 36 hours of on-board back-up supplies. Strata’s novel ActiveAir™ carbon dioxide scrubber in each chamber is fitted – by the mine’s request – with the Trolex Sentro8 SensorStation to provide up to eight choices in gas detectors and atmospheric monitoring sensors. Oxygen and carbon dioxide sensors are standard, as these work to maintain safe air quality for the occupants. Air conditioning, padded seats and a private lavatory provide occupant comfort.