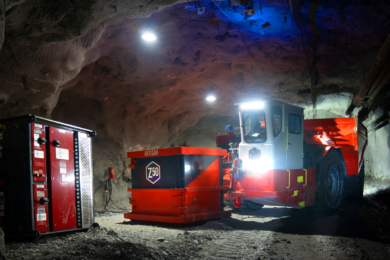 Pretivm is investing in a fleet of Sandvik Z50 battery-electric haul trucks to replace its diesel truck fleet at its Brucejack underground gold mine in northwestern British Columbia, Canada. Following a successful six-month trial during which a Sandvik Z50 proved to fit the production and sustainability needs of the 3,800 t per day Brucejack operation, Pretivm has selected Sandvik to supply seven Sandvik Z50 haul trucks, with the option for an eighth. Sandvik will begin delivery of the battery electric vehicles (BEVs) next month, with a final delivery date for the entire fleet expected in early 2023.

“Replacing our diesel-fuelled fleet with zero-emissions electric haul trucks delivers significant environmental benefits and extends the advantages from our use of low-carbon hydro-electric power at Brucejack,” said Jacques Perron, President and Chief Executive Officer of Pretivm. “The successful test period with the Sandvik Z50 haul truck provided the opportunity to confirm the production benefits of the BEV technology in our own underground operations.”

The envelope size of Sandvik Z50 is one of the smallest 50 t capacity trucks on the market and generates twice the peak horsepower and 1/8th the heat of its diesel equivalent. “The success of the Sandvik Z50 battery truck at Pretivm is indicative of an expected trend we will see with underground mining operations in the pursuit of productive technologies that reduce overall costs, while significantly reducing environmental impact,” said Dale Rakochy, Business Line Manager for Sandvik’s Load and Haul division. “We are proud to support Pretivm in their pursuit of sustainable technologies.”

On top of the sustainability improvements with battery-based mining, another major benefit of electrification is the amount of money that can be saved on initial capital and operating expenses, including construction of ventilation shafts and the cost of operating ventilation systems. Added Perron: “The implementation of the battery-electric Sandvik Z50 haul trucks is expected to improve operations at Brucejack, including the potential reduction of ventilation requirements and increased haul capacity.”

To further support this shift to battery-powered equipment, Sandvik now offers Batteries as a Service (BaaS) to partners including Pretivm. This turnkey solution eliminates the risk of owning batteries as Sandvik takes full responsibility of battery maintenance, renewal and disposal.

The Brucejack fleet order is one of a number the company has recently secured, with the company saying it received orders for battery-electric mining vehicles (BEVs) amounting to about SEK140 million in June, marking Sandvik’s highest ever order intake for mining BEVs in a single month.