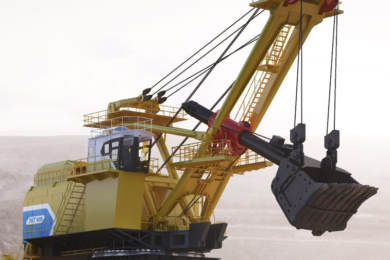 Following the recent news that Ekaterinburg-based Uralmashplant JSC (UZTM), part of the UZTM-KARTEX Group, the leading Russian manufacturer of mining equipment, had won a tender for supply of five walking draglines to the leading Indian mining concern Coal India Ltd (CIL) for over $350 million, the cooperation between the two groups continues with CIL now ordering 11 electric rope shovels from St Petersburg-based IZ-KARTEZ, named after P. G. Korobkov, the other half of UZTM-KARTEX which is ultimately owned by Russia’s Gazprombank.

The INR1461.81 crore (over $195 million) contract with IZ-KARTEX covers supply, installation, and commissioning of 11 20 m³ electric rope shovels for Northern Coalfields Ltd (NCL). The delivery of all the equipment is to be made by September 2023. The contract includes the supply of spares & consumables for a period of eight years. Shri Binay Dayal, Director – Technical, CIL signed the contract on behalf of CIL, and Yan V Tsenter, Chairman of Board of Directors and General Director, IZ-KARTEX signed on behalf of the Russian OEM.

“This is the first major equipment procurement finalised in the ongoing fiscal so far. We are fast tracking our procurement process in a bid to strengthen our mining equipment and replace the aging machines,” CIL said. Three each of the machines will be put into operation in the Nigahi, Dudhichua and Jayant coal operations, and one each will be used in Khadia and Amlorhi. There are already nine of these shovels operational in NCL so the latest acquisition will increase their number to 20. “Each of the 20 m³ electric shovels is priced close to INR133 crore including the landed value of the equipment, spares and consumables for eight years,” the statement said. The first machine will roll out in NCL in June next year and thereafter at least one every 45 days. Coal India also has Chinese made WK-20 shovels of this class in its fleet from Taiyuan Heavy (TYHI).

The investment in larger IZ-KARTEX and TYHI shovels fits with the truck investments CIL has been making of late including BELAZ 7531/75137, Caterpillar 789D and BEML BH150E/BH205E units. CIL has also said that in the future it will need larger shovels of more than 35 m³.