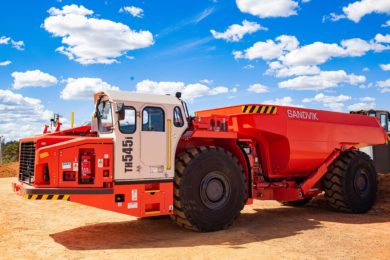 Sandvik has recently delivered its first i-series truck to Brazil, with the 45-t payload TH545i heading to OZ Minerals Brazil’s Pedra Branca copper mine in Pará in the northern part of the country.

The model has automation features that bring more productivity and safety to the operation, according to Sandvik. Compared to its predecessor, the Sandvik TH540, the truck offers a significant capacity increase by carrying 5 t more. The truck’s standard engine power, meanwhile, increased to 450 kW, from 405 kW, to maintain the same speed with the increased payload.

Other equipment will be delivered to the Pedra Branca mine over the next few months, with, in all, five different models of drilling, loading and transport equipment making up the “modern and complete fleet”, Sandvik said.

The new fleet additions are all part of OZ Minerals’ ramp-up efforts at the underground mine, which is targeting increased mining from ore stopes from the June quarter onwards.