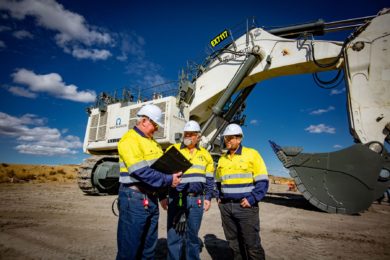 Macmahon Holdings Ltd has added around A$1.35 billion ($988 million) of work to its order book with the signing of three previously flagged contract mining gigs, plus announced the addition of surface mining work at Northern Star Resources’ Julius gold project in Western Australia.

The three projects making up the A$1.35 billion of contract mining works are the 5-year agreement with St Barbara Ltd at the Gwalia gold mine, a three-year pact with Anglo American at Dawson South and a five-year contract with Red 5 Ltd at King of the Hills.

The contract with Northern Star Resources at Julius is expected to deliver revenue of A$25 million over the next 12 months. Production from the Julius deposit is expected to complement output from NSR’s Jundee operations.

In addition to these projects, Macmahon says it is well progressed in finalising the commercial arrangements for Phase 8 of its Batu Hijau copper-gold project in Indonesia, an operation owned by PT Amman Mineral Nusa Tenggara.

Macmahon commented: “While Macmahon has observed a tightening of the labour market in Australia over the past year, it can confirm that the Gwalia, Dawson South and Julius projects have commenced operations by the times required in those contracts.

“Macmahon has existing strategies for responding to challenges in the availability of labour, and believes it is well placed to continue to manage this operational issue into the foreseeable future, and to continue to deliver value for its clients.”

Commenting on today’s announcement, Macmahon CEO and Managing Director, Michael Finnegan, said: “Macmahon is continuing to build on its track record for delivery and to advance its growth strategy.

“It is very satisfying to have secured significant new work during financial year 2021, which provides us with a strong order book and excellent earnings visibility for FY22 and FY23. The underground work at Gwalia and King of the Hills also adds scale to our underground business, which is an important step in our strategy to diversify Macmahon.”