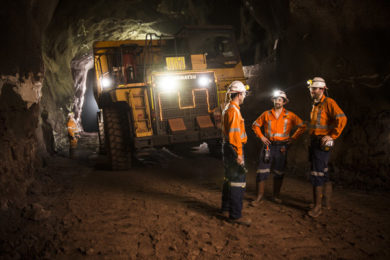 The OZ Minerals Board has approved construction of a hoisting shaft at the Prominent Hill copper-gold mine in South Australia, paving the way for a mine life extension and throughput expansion.

Prominent Hill mine began operation in 2009 as an open pit and is now an underground mine producing 4.5 Mt/y, moving to 4.5-5 Mt/y from 2022 via a trucking operation.

Coming with a pre-production capital expenditure of A$600 million ($436 million), the Wira Shaft expansion project will see the underground production rate increase to 6 Mt/y from 2025. At this point, the average annual copper and gold production is expected to be circa-54,000 t and circa-108,000 oz, respectively, some 23% more than expected in the current trucking operation.

The study leverages close to 100 Mt of mineral resources outside the previous Prominent Hill ore reserves of 38 Mt of underground material.

Sinking of the shaft is expected to commence in the March quarter of 2022. Mining and installation of underground and surface infrastructure is scheduled for completion along with commissioning of the Wira shaft at the end of 2024, with nameplate capacity expected in the first half of 2025.

The shaft design comprises a 1,329-m-deep, concrete-lined shaft with a diameter of 7.5 m. Construction of the shaft will be via conventional strip and line method, with the sinking period approximately two years.

The shaft mine expansion also enables generational province potential with further mine life extensions possible as 67 Mt of resource remains outside the shaft expansion mine plan, OZ Minerals says. Further, an exploration program has also identified that mineralisation remains open at depth beyond the current resource boundary, potentially accessible via the shaft.

“Prominent Hill is a quality orebody and remains open at depth. The reliable performance of the operation and its consistent resource to reserve conversion rate were all influential in the decision.”

For the first time, the company has used a carbon price in determining the project valuation, a practice it plans to adopt in other OZ Minerals projects going forward, Cole said.

The company plans to reduce its underground loading fleet to eight vehicles, from nine after the shaft expansion, with its trucking fleet going from circa-14 to five, post-shaft.

Scope 1 emissions intensity per tonne of concentrate are also expected to drop from 0.47 t CO2-e/t to 0.28 t CO2-e/t after the shaft installation.

The pre-production capital of A$600 million, which was an increase on the A$450 million outlined in the November 2020 expansion study, enables transformation of the site in line with the strategic aspirations of OZ Minerals, it said.

Provisions have been included in site capital projections to support this transformation, including progressing underground fleet electrification, upgrading some of the existing infrastructure, remote operation capability and automation.

The company expanded on this: “A battery-powered mining fleet is part of the future vision as OZ Minerals moves towards its zero-carbon emission aspiration. For this study, diesel trucks were assumed. However, installation of enabling infrastructure is included in the Prominent Hill Expansion case to minimise future disruptions when the switch to an electric fleet occurs. This, implemented as part of the asset’s site-wide electrification aspiration, would contribute to a further reduction in Scope 1 emissions.”

A pilot study is also being undertaken to review a low-energy dry grinding option. The Prominent Hill Expansion Study is not directly connected to, nor dependent on this ongoing work, however, the work presents potential future cost reduction and other opportunities, OZ Minerals said.