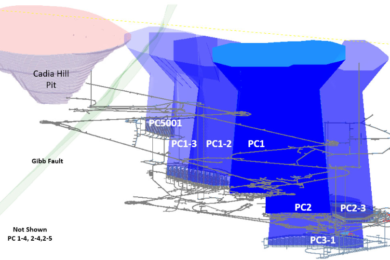 It will have a ~17 year mine life from first production, at an average of 15 Mt/y with total ore production of 258 Mt producing 3.5 Moz of gold and 660,000 t of copper. Through the Feasibility Study, Newcrest will also investigate the application of single pass caving, mechanical excavation and remote production during the execution of PC1-2, in line with its Next-Gen Caving strategy. These have not been assumed in the Study findings to date and represent upside opportunities. 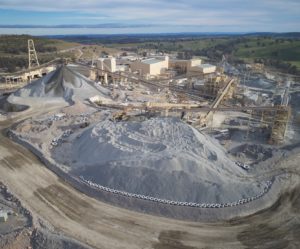 Total capital expenditure for the development of PC1-2 is estimated to be ~A$1.3 billion, with first production expected in CY25. The timing of PC1-2’s development is expected to ensure that, in conjunction with the already approved PC2-3 project, the total Cadia mine production rate is sustained at ~35-36 Mt/y as production from the operational PC1 and PC2 caves begins to decline from FY24. The PC1-2 Pre-Feasibility Study includes enhancements over previously published mine designs, which include:

It is planned to bring PC1-2 into production across two stages:

The PC1-2 cave is expected to take approximately six years to reach its maximum production capacity from the time of the blasting of the first drawbell. Newcrest Managing Director and Chief Executive Officer, Sandeep Biswas, said: “The development of the PC1-2 cave is the next step in Cadia’s block caving journey. The Study underpins an optimised mine design which we expect will deliver higher gold and copper grades and enable the deferral of capital expenditure in the medium term. We have significant financial headroom to fund the construction of PC1-2, together with our other organic growth options, from our expected cash flow generation over the development period and our strong balance sheet. This project, together with the expansion project currently in progress, is expected to sustain Cadia’s position as one of the largest, lowest cost and long life gold mines in the world. The team at Cadia is passionately committed to building on this world class asset, driving employment and other benefits for the local community and other stakeholders, and maintaining a focus on innovation, continuous improvement and sustainable development.”