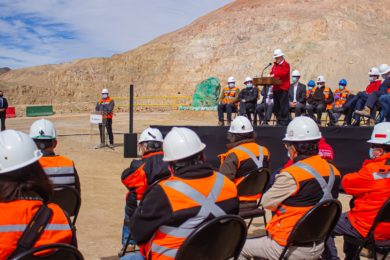 In a ceremony with reduced capacity, and led by the Chilean President Sebastián Piñera, Codelco officially began the works of Rajo Inca, a major expansion project that seeks to give continuity to Salvador Division. “Today we are very happy to be able to discard that ghost that haunted these lands, to give them the tranquility and projection that 47 years ahead mean, because today we are silencing those fears. The Rajo Inca, who is behind my back, gives Salvador a new life,” said President Piñera.

Through a radical change in the exploitation method, which up to now has been mainly carried out by underground mining, with this project the copper ores will be extracted in the open pit, and the existing infrastructure will be optimised for its processing. With surface exploitation, Salvador will go from the current 60,000 t of fine copper to a production of 90,000 t per year, which implies 50% more production. Full production at Rajo Inca will commence H1 2023.

This project, which involves an investment of US$1,383 million and will have 2,400 jobs in the peak construction period, will extend the useful life of Salvador, which began operations in 1959, until 2070. In this regard, the President of the Board of Directors of Codelco, Juan Benavides, stated that: “Until now this division depended on three underground mines. The new Salvador will obtain all the contribution of the mineral from a single open pit, with copper grades 40% higher than the current ones, which will influence the increase in production and productivity.”

In addition, Benavides emphasised that with the inauguration of this project “we will advance in recovering our historical position as a pole for innovation and technology in Atacama. With discipline, we will fulfill and enforce the commitments acquired.” Some Codelco commitments from the beginning of the Rajo Inca work are that during the implementation process a series of voluntary measures will be taken, such as the hiring of local labour for the construction and operation phases, the hiring of labour with equal gender approach, support for local entrepreneurship and technical-professional practices for secondary students from neighboring communities.

Finally, this mining complex will produce cathodes and concentrates that can be sent to the Port of Barquitos or to the Potrerillos smelter. In addition, the project implies a contribution to regional GDP of 3% and a contribution to direct and indirect employment to the employment rate in the region, which is calculated at 9% in the Diego de Almagro and Chañaral communes during the life of the project.