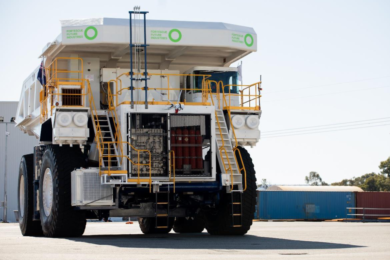 In March 2021, iron ore mining major Fortescue Metals Group (FMG) set an industry-leading target to achieve carbon neutrality within its operations by 2030. This target includes existing operations and extends to all future operations, including acquisitions.

In its just released FY2021 Climate Change Report, FMG gave an update on its progress on reduction of Scope 1 emissions, which is being achieved via new company Fortescue Future Industries (FFI) which will be key to Fortescue’s decarbonisation pathway through technology development and the supply of renewable energy, green hydrogen and green ammonia for its operations. 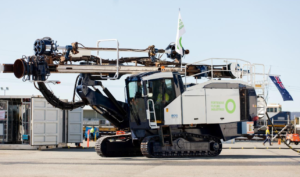 Haul trucks at FMG mine sites account for approximately 26% of its Scope 1 operational emissions or 537,000 t of CO2-e emissions in FY21. “Decarbonising the mining fleet is one of the biggest challenges facing our industry. While electric light vehicles are readily available for the passenger and domestic market, there are currently no large-scale economic or technologically viable vehicles available for our haulage operations.”

FFI has established its own research and testing facility in Perth, and this facility will become the focal point of innovation and collaboration to accelerate the commercialisation of FMG’s low emissions solutions. “We are investigating the main alternatives to diesel, including battery electric and hydrogen fuel cell options, to ensure we capture the opportunities offered by both technologies.”

On electric battery trials it has partnered with Williams Advanced Engineering (WAE) to design, build and integrate an all battery system to power an electric mining haul truck. The bespoke battery electric powertrain will have the ability to generate power as the truck travels downhill. WAE has begun testing the cells of a battery that will power a 240 t prototype haul truck before performance testing at FMG’s Pilbara mining operations. The project also includes the development of a fast-charging unit that will harness renewable energy from PEC – Pilbara Energy Connect.

On hydrogen powered fuel cells, FFI has also designed and constructed a demonstration green hydrogen powered haul truck, with testing now underway. This is understood to still be a fuel cell electric vehicle ie FCEV utilising both hydrogen fuel cells and batteries. The rollout of haul trucks powered on alternative fuels is expected to commence across Fortescue’s operations in the second half of the decade. “While we drive this work, we will continue collaborating with a broad range of stakeholders, including original equipment manufacturers (OEMs) and research organisations such as the CSIRO.”

Other heavy mining equipment (HME), including drill rigs and excavators, accounts for approximately 36% of FMG’s Scope 1 operational emissions, or 746,000 t of CO2-e emissions in FY21. “This year, we commenced trials to replace diesel engines in HME with electric motors that use hydrogen fuel cells as their power source. To date, we have begun testing a green hydrogen powered drill rig, including the important element of ensuring refuelling can occur in the mine pit. This work will draw on learnings from our A$32 million investment in a renewable hydrogen refuelling facility and deployment of fuel cell passenger coaches at Christmas Creek.”