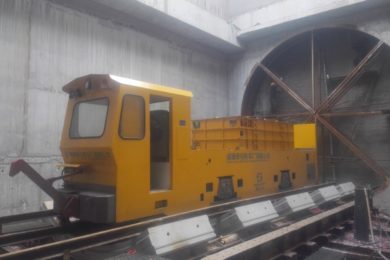 Frey New Energy is a lithium-ion battery manufacturer located in Xuzhou, China, and the company says it is celebrating its custom-made lithium battery packs being used in underground mining now for three years without any reported technical issues. The company told IM that it sees the three year milestone as a boost of confidence for the mining industry in China in the safety and reliability of lithium-ion batteries.

It added: “There are some very big lithium battery players but they are focussed on energy storage and the general industrial EV market. But if you use the EV batteries for heavy EVs like mining locos and loaders – it is just adequate but we would argue not good enough. To be specific, we have much higher C-rating, and our batteries are built differently to be durable allowing use in rough conditions but still delivering high power capacity. For example our copper and aluminium films are thicker.”

Compared with lithium-ion battery giants like CATL and BYD, Frey New Energy says it is a boutique company with annual production capacity of 0.5 GWH lithium batteries. It focuses on only making customised battery packs for speciality industries like mining and heavy-duty material handling. It also says its unique service gives mining equipment makers a unique opportunity to electrify their custom-made mining vehicles and machines in small batches. 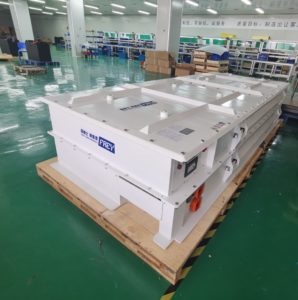 The company has a number of underground mining locomotive references in particular though has also supplied battery packs for LHDs. In August 2018, Frey New Energy custom built 12 units of 96 kWh Li-ion battery packs for Hunan Yutong Mining Equipment, one of the leading Chinese mining locomotive manufacturers.  The batteries were used in Yutong’s 12 t battery locomotive, which has a capacity of 120 t of ore and is working in an underground gold mine operated by Shandong Gold Mining in Silingrad, Inner Mongolia, China. The temperatures in Silingrad can fall as low as -30°C , while humidity underground gets as high as 90%. However, the lithium batteries installed three years ago, continue to work well today with no issues.

Each 96 KWh battery back was assembled with 300 lithium LiFePO4 cells with rated capacity of 3.2 V100Ah.  The battery pack was tested to be confirmed as explosion-proof under the test criteria laid down by the Mining Products Safety Approval and Certification Centre (MA Centre) in Beijing.  The enclosure of the rugged case is also explosion-proof and it is IP67 rated, which means totally protected against dust and the effects of temporary water immersion between 15 cm and 1 m.

“The switch from lead acid to lithium is the right move. We are lucky we did it early with Frey New Energy. If we continued using the lead acid, we would have already needed to replace the batteries twice in three years. Our mining customer will never go back to lead acid. Once it’s switched to lithium it’s almost impossible to go back,” said Kaibang Guo, Sales Director of Yutong.

When asked how many more years the batteries are expected to serve, the VP Engineering at Frey New Energy Zhenghai Hu states: “The packs were designed to have at least five years’ service life before the end of life, which is 76.8 KWh, and according to current condition, this means at least another three years.” In addition to the mine in Silingrad, Frey New Energy delivered batteries for a Yutong loco at Hongling lead-zinc mine in Inner Mongolia.

All three of these companies – Yutong, XEMC and Secutra are among China’s leading suppliers of mining locomotives including to gold, coal, copper, lead-zinc, iron and other operations. They are all based in Xiangtan, Hunan Province.