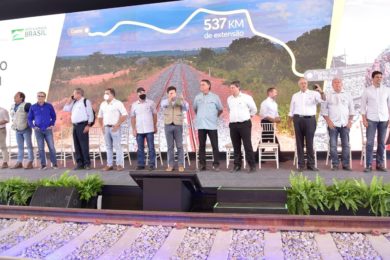 Eurasian Resources Group (ERG) says its wholly-owned Brazilian subsidiary, BAMIN, has signed a concession agreement with the Brazilian Federal Government to complete and operate a section of the FIOL (East-West Integration) railway in the country.

BAMIN will advance the construction works, which until recently were carried out by the state-owned railway engineering and construction company Valec.

The sub-concession has been granted for a 35-year period, which includes an allowance of five years for the construction of the railway and 30 years for its operation. BAMIN’s investment into the railroad and the rolling stock will amount to around BRL3.3 billion ($683 million).

In April 2021, BAMIN won the auction on the B3 (São Paulo Stock Exchange) to complete and operate the first 537 km stretch of the FIOL. The concession agreement has now granted BAMIN 120 days to evaluate the progress of the construction and other related works. This preliminary phase precedes the preparation of a plan to resume the construction, which is scheduled for the second half of 2022.

Tarcio Gomes de Freitas, Minister of Infrastructure of Brazil, said: “The importance of this infrastructure project in the state of Bahia cannot be overstated. The project is very well structured and includes an iron ore plant, a railway and a seaport. The railway, which is undergoing construction, will serve the mining industry, as well as the agricultural sector, which is growing at an unprecedented pace, particularly in the west.”

BAMIN has already hired professionals in the rail industry to oversee the management of the FIOL railway. BAMIN will also leverage ERG’s international expertise as the largest transport operator in Central Asia with extensive experience in rail transportation, ERG says. Each year, ERG transports over 50 Mt of freight using 10,000 vehicles, while also maintaining and repairing 2,500 wagons and over 1,000 locomotives.

Benedikt Sobotka, CEO of Eurasian Resources Group, said: “All across the globe, railways play a crucial role in urban development, enabling people to gain access to new opportunities. In Brazil, we are confident that FIOL will act as an important connecting point between regions, cities and people, contributing to economic growth, and creating a strong link between the west and the east of the country. The logistics and exportation corridor that BAMIN will create will transport millions of tonnes of iron ore, agricultural products, as well as other goods.”

With the resumption of construction, the project is expected to boost the country’s economic growth at both the federal and the local level: FIOL will strengthen the rail network across 20 municipalities in Brazil, while also boosting foreign trade, ERG says.

Once completed, FIOL will be able to carry 60 Mt/y of freight, with BAMIN’s products accounting for a third of this capacity. More than 40 Mt of cargo will be made available for other businesses in both the mining and agricultural sector, as well as other industries in the Bahia region.

ERG said: “The importance of the FIOL railway cannot be overstated, as the railway will be part of an integrated logistics project that will connect the Pedra de Ferro mine in Caetité with the Porto Sul, currently under construction in Ilhéus, Bahia. Following the commencement of commercial operations in January 2021, the Pedra de Ferro Mine is expected to produce 1 Mt by the end of this year. Once the South Port and FIOL are completed (expected in 2026), the mine should produce 18 Mt of iron ore per year.”

Eduardo Ledsham, CEO of BAMIN, said: “The Pedra de Ferro mine, Porto Sul, and FIOL projects are an important milestone for the country’s economic development, and a source of pride for the Bahia State and all Brazilians. We are creating a new logistics corridor to integrate the west with the east of Brazil, creating a new, important exportation pathway.

“The state of Bahia will occupy a new and important place in the national economy, becoming the third largest iron ore producer in the country, generating wealth and prosperity, while also increasing the population’s income and improving the quality of life.”