One Liebherr PR 776 72 t dozer and three PR 766 53 t dozers have been purchased by Argonaut Gold for the Magino mine project in Canada. Liebherr-Canada says it will ensure that Argonaut Gold receives expert technical knowledge and experience through a partnership to maximise the performance of the dozers through the long term. It adds that it is “confident the PR 776 and PR 766 will deliver class leading performance and productivity throughout the product life cycle. They have proven fuel economy, safety, operator comfort, and performance.”

“Argonaut Gold is a capable, patient, yet highly dynamic business. We have been watching Argonaut’s vision turn into reality with a great deal of enthusiasm. When the opportunity arose to work with Argonaut Gold on the Magino project, it was quickly and unanimously agreed they were a strategic partner for Liebherr-Canada. We are thrilled to be providing our exceptional dozer product and our world class service to this transformational project and cannot wait to see the tracks hit the ground.” said Tom Juric, Divisional Director, Mining for Liebherr Canada. Liebherr and Argonaut Gold commemorated the purchase with a signing ceremony at MINExpo 2021 last week. 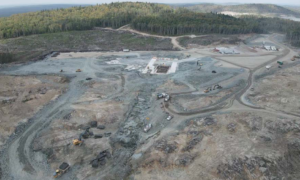 The Magino mine property is a past producing underground gold mine located 40 km northeast of Wawa, Ontario, approximately 14 km southeast of the town of Dubreuilville. “Magino is truly a valuable and strategic asset. By moving Magino forward, we are executing on our vision to transform Argonaut from a junior, relatively high-cost producer with short mine lives to an intermediate, lower-cost producer with long mine lives,” said Pete Dougherty, President & CEO of Argonaut Gold. The Magino project is forecast for its first gold pour in Q1 2023 at an initial rate of 150,000 oz/y.

Argonaut Gold is a Canadian gold company engaged in exploration, mine development and production. Its primary assets are the El Castillo, San Agustin, and La Colorada mines located in Mexico and the production stage Florida Canyon mine in Nevada, United States.

In its September newsletter, Argonaut Gold said that in August, site works and construction milestones included foundation preparations in progress, with leach areas and subdrains backfilled. There was ongoing drilling and blasting for conveyor belt areas plus concrete formwork placed for ball and SAG mill structural foundations. The month saw completed boreholes for plant-site substation and a completed final section of pre-shear drilling in the open pit and production drilling and blasting ongoing. Dam access roads and liners were also completed. Pre-production mining has also commenced and includes continued reverse circulation (RC) ore control drilling, haulage of oversize material from open pit to the water quality control pond stockpile for road completion, plus the company reports completion of the Goudreau by-pass and berms, with the road operational.