International Mining sat down with MMD at MINExpo 2021 for an exclusive update on its Fully Mobile Surge Loader (FMSL) – its innovative in-pit solution that acts as a mobile storage bunker between the shovel and a continuous flow of trucks. It is designed to be capable of an average fill rate of approximately 70 seconds for a 400 t class truck.

The first unit in production is showing impressive results so far. It is delivering the expected benefits of almost eliminating non-productive truck spotting time. Louis Steyn, MMD VP told IM: “With this intelligent solution, trucks are loaded significantly faster than loaded directly by a shovel, and loaded in such a manner that is also safer and reduces wear on the truck fleet. It transforms the loading of haul trucks, making the process faster, more efficient and safer than ever before.” 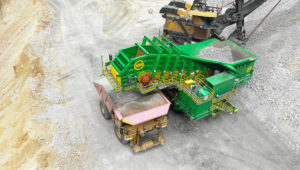 Trucks approaching the FMSL are first identified by RFID. After detection, the numerous sensors on-board the FMSL guide each truck type into the prescribed optimal loading position. Regulated material loading starts automatically and the payload is intelligently monitored to deliver a consistently high fill rate. 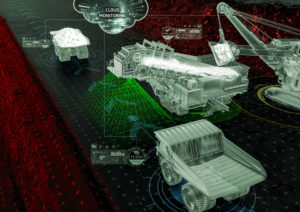 Simulations have shown the FMSL’s potential to deliver up to 40% improvement over truck and shovel system performance, up to 95% shovel utilisation and up to 98% average target payload.

The FMSL also represents a major step forward for mine safety; not only does it eliminate the complicated reversing manoeuvres in the loading area, but also the steady flow of material from the surge loader onto the truck bed is less aggressive, reducing shock loading and operator fatigue. These two factors, combined with optimal material loading also reduces damage and wear to truck components, such as the truck body, wheels and tyres, suspension, chassis and drive train. Having finite control over the truck payload also helps prevent overfilling of the truck and the potential for roll-back, spillage and other associated hazards.

The large material storage capacity provided by the hopper allows the shovel to reposition without interrupting the truck fleet production. Safe relocation of the FMSL is either by the shovel operator or via remote control. Additional protection systems such as geofencing and collision detection deliver complete safety.

Because the FMSL effectively decouples the truck and shovel operations, it also facilitates loading of a variety of truck types and capacities from a single shovel, overcoming a long-standing issue of truck/shovel incompatibility. Steyn notes: “The traditional restrictions of being pass-matched and fixed to a small fleet of costly ultra-class trucks is no longer an issue. The FMSL provides the opportunity for larger fleets of smaller, more economical and environmentally friendly trucks, promoting the use of alternative fuels. This approach can also generate greater system flexibility and ore/waste management.” 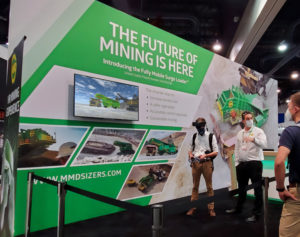 Looking ahead, the combination of the FMSL with autonomous systems, where a truck can spot perfectly every time– opens up its potential even further. Steyn adds: “The FMSL is already intelligent and autonomous so combining this with AHS trucks will be relatively straightforward and promote a truly fully autonomous mine of the future.”