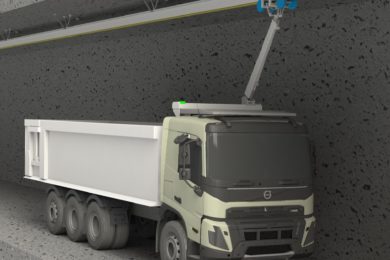 A BHP spokesperson said the collaboration was “part of our multi-faceted approach to reducing vehicle emissions at our operations”.

It is one of several decarbonisation collaborations BHP Ventures is involved with in pursuit of BHP’s decarbonisation goals. Others include partnering on supply chain traceability through Circulor and low emissions steelmaking through Boston Metals.

Back in August, BluVein announced that seven major mining companies had financially backed BluVein, with the industry collaboration project now moving forward with final system development and construction of a technology demonstration pilot site in Brisbane, Australia. This came on top of agreements with four major mining vehicle manufacturers to support BluVein controls and hardware integration into their vehicles.

BluVein, a joint venture between EVIAS and Australia-based Olitek, is developing technology that removes the need to employ battery swapping or acquire larger, heavier batteries customised to cope with the current requirements placed on the heaviest diesel-powered machinery operating in the mining sector.

It is doing this through adapting charging technology originally developed by Sweden-based EVIAS for electrified public highways. The application of this technology in mining could see operations employ smaller, lighter battery-electric vehicles that are connected to the mine site grid via its ingress protection-rated slotted Rail™ system. This system effectively eliminates all exposed high voltage conductors, providing significantly improved safety and ensures compliance with mine electrical regulations, according to BluVein. This is complemented with its Hammer™ technology and a sophisticated power distribution unit to effectively power electric motors and charge a vehicle’s on-board batteries.

BluVein has been specifically designed for harsh mining environments and is completely agnostic to vehicle manufacturer, according to the company. This standardisation is crucial, BluVein says, as it allows a mixed fleet of mining vehicles to use the same rail infrastructure.

BluVein says it plans on starting the trial install early works towards the end of this year for a mid- to late-2022 trial period in a simulated underground environment.

The BluVein project is being managed by the Canada Mining Innovation Council (CMIC).