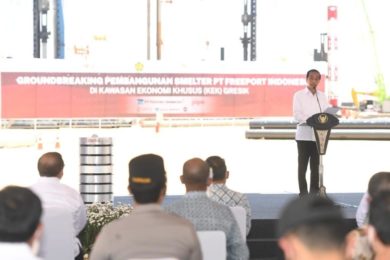 The $3 billion smelter will have a 1.7 Mt/y copper concentrate and 600,000 t/y copper cathode capacity plus will include a $200 million 54 t/y capacity gold refinery being built in JIIPE is a project to strengthen the national downstream metals industry in Indonesia. PTFI has signed an engineering, procurement and construction contract for the project with Japan’s Chiyoda.

JIIPE is a strategic national project jointly promoted by PT AKR Corporindo Tbk., (AKRA.IJ) along with state-owned Pelindo III which will integrate the industrial estate with deep seaport and other utilities. “The arrival of PTFI in the Special Economic Zone (SEZ) JIIPE in Gresik will be a strong pull factor for other industries to invest in Indonesia, especially those in the copper derivatives industry. We will keep supporting the development of infrastructure, as well as easing business processes. In addition, the local government of East Java province and district of Gresik will contribute to meeting the human resources needs of SEZ Gresik to make Indonesia more attractive as an investment destination,” said President Widodo.

According to Jakarta, Indonesia-based news agency ANTARA News, State-Owned Enterprises (SOEs) Minister Erick Thohir also highlighted at the event the plan of state-owned telecommunication provider Telkom Group to collaborate with gold and copper miner giant PT Freeport Indonesia in developing a 5G network for the mine in Mimika Regency north of Timika.

“In line with the global transformation of Industrial Revolution 4.0, we hope that the 5G mining technology can get inaugurated in the next six months. It will be the first one implemented in Southeast Asia,” ANTARA News quoted him as stating at the groundbreaking ceremony. “In addition to maintaining operational security, the technology will help in protecting workers, as the site is an underground mining area,” he noted. Furthermore, the 5G mining technology will streamline the plant’s integration by implementing a hyper-connected network. The news item also referred to comments about implementation of more autonomous mobile machinery at the mine.