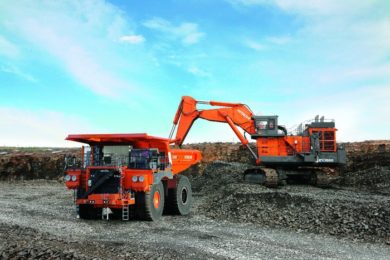 Hitachi is continuing its success in the Russian and CIS region – two new Hitachi EX3600 mining excavators with 22 m3 buckets and 10 Hitachi EH3500 dump trucks with a 180 t payload is being put into operation at the Vostochny open-pit mine of Sibanthracite in Russia’s Novosibirsk region as part of the group’s strategy to increase the use of high-performance, large-capacity mining equipment. The vehicles will work together as a single system to process overburden at the mine by one of the company’s contractors.

Stripping operations are currently carried out by excavators with bucket capacities of 6 to 15 m3 and dump trucks with lifting capacities of 90-130 t. The Hitachi vehicles will be able to ship up to 900,000 m3 of rock mass per month. With their commissioning, the volume of overburden extracted at the Vostochny open-pit mine will grow by 15%, reaching 4.4 million cubic metres per month.

“The increase in the volume of stripping operations is a good foundation for the future growth of anthracite production at Vostochny open-pit mine. This year, Sibanthracite Group mines will produce over 23 Mt of coal, and Vostochny open-pit mine plans to provide about 30% of that. This high-performance equipment will help us achieve these targets,” said Evgeny Morozov, Vostochny open pit-mine’s Executive Director.

The use of heavy-duty equipment increases the intensity and efficiency of mining operations and optimises the company’s costs. Moreover, less diesel fuel is consumed per cubic metre of imported overburden, so the volume of exhaust gases emitted around the quarry is reduced, which has a positive effect on the area’s environment. The use of high-capacity vehicles also increases safety on access roads. Vostochny open-pit mine will continue to increase the percentage of heavy-duty equipment used in its mining operations. In November 2021, a Liebherr R 9400 excavator with a 22 m3 bucket capacity will be delivered. By the end of the year, 10 more mining dump trucks with capacities of 220 t will arrive at Vostochny open-pit mine.