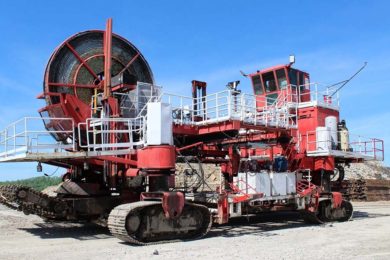 Bens Creek Group Plc, the owner of a namesake met coal mine in North America, is pleased to announce that its wholly owned subsidiary, Ben’s Creek Operations LLC, and Mega Highwall Mining LLC have entered into a contract mining services agreement.

MHW will be responsible for the production of BCO’s metallurgical coal reserves for an initial 12-month period, the London-listed company said.

The contract allows for a minimum production capability of 40,000 tons (36,287 t) of coal per month, which equates to 480,000 tons/y. MHW will deploy a single highwall miner (a Superior Highwall Miner, the company confirmed), which is designed to meet the target sales volumes disclosed in the recently signed offtake agreement between the company and Integrity Coal.

MHW and BCO have agreed a fixed price per ton of coal produced for the duration of the contract period. The contract price negotiated is in line with the company’s working capital projections, despite the uptick in demand for contract mining services and high wall mining equipment in the US, it said.

The contract allows MHW to mobilise its equipment and personnel to commence production in December 2021.

MHW, founded in 2015, is a Kentucky-based company, who operate a range of industry leading specialist highwall mining systems, comprising of ADDCAR, Superior Highwall Miners and Caterpillar.

“The nature of highwall mining is that the recoverability of metallurgical coal via direct mining into the coal seams is considerable, which allows for production to be targeted to seams which have a higher level of recoverability than traditional mining methods.”

Ben’s Creek is set over 10,000 acres (4,047 ha) in the Central Appalachian Basin of the eastern US and located in the southern part of West Virginia and eastern edge of the Commonwealth of Kentucky.

Historically metallurgical coal has been produced from the property. Ben’s Creek has proven recoverable coal reserves of 2.34 million tons (comprising the coal reserves at the Lower Alma and Pond Creek mines) and has coal resources of 17.2 million in-place tons with a potential of a further 30.9 million tons, it says.