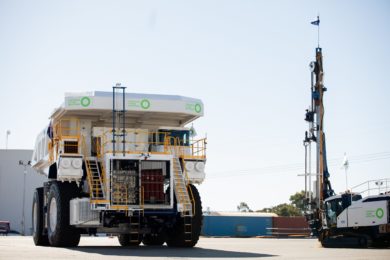 Green hydrogen first mover Fortescue Future Industries (FFI) has taken to the global stage at the crucial COP26 climate talks this week in Glasgow, UK with FFI Chairman Dr Andrew Forrest and FFI Chief Executive Officer Julie Shuttleworth meeting with world leaders, while Shuttleworth also spoke at the World Leaders Summit event attended by global leaders in politics and business. Not only that, but FFI has also announced that it will become the largest supplier of green hydrogen to the UK after signing a multi-billion-pound deal with construction giant J C Bamford Excavators (JCB) and Ryze Hydrogen (Ryze) who are set to purchase 10% of FFI’s global green hydrogen production which is anticipated to grow to 15 Mt of per year by 2030, accelerating to 50 Mt per year in the next decade thereafter. 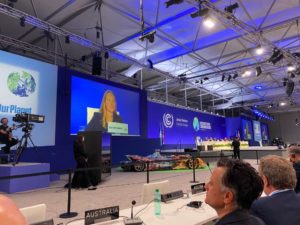 But green hydrogen is also part of sister company and iron ore mining giant Fortescue Metals Group’s own journey to net zero and IM Editorial Director Paul Moore recently caught up with Shuttleworth on some aspects of the green hydrogen and other power solutions for next generation mining equipment that will also help FMG achieve its goals. Fortescue has set an industry leading target to be carbon neutral by 2030, underpinned by a pathway to decarbonisation which is focused on investing in renewable energy and eliminating the use of diesel in its mining fleets. Its Green Team has been managing and trialling technology on renewable hydrogen, ammonia and battery power for trains, ship engines, haul trucks and drill rigs for technology demonstration.

For mining trucks, FFI took a older 221 t class Terex Unit Rig MT4400 AC electric drive truck that it already had in its fleet and converted it into a running fuel cell electric vehicle (FCEV), powered by green hydrogen and battery power, in only 130 days. The prototype is limited to 15 km/h for safe operation at the Hazelmere, Perth test facility due to the size of the yard but by late 2022, FFI is aiming to test at Fortescue iron ore minesites both this FCEV hydrogen fuel cell truck as well as a 240 t all battery electric truck that is in development in a project with Williams Advanced Engineering. The FFI prototype FCEV truck is powered by a 180 kW fuel cell system with a 300 kW/hr battery. WAE has begun testing the cells of a battery that will power the battery electric truck before performance testing at FMG’s Pilbara mining operations. The project also includes the development of a fast-charging unit that will harness renewable energy from PEC – Pilbara Energy Connect.

Shuttleworth added that one of FFI’s values is frugality – and that the MT4400 AC was chosen as the base truck for the FCEV project as it had achieved its end of life for mining, it was available and is a good donor truck for this type of work. When asked what made it possible to achieve an operating FCEV truck in only 130 days, Shuttleworth commented: “Stretch targets are nothing new for Fortescue, and at FFI we have approached this as we have done with other stretch targets – by setting targets that others would consider impossible and then leveraging from our experiences through engineering, trades, and leadership to work collaboratively together as a fully empowered and entrepreneurial team.” She added on whether the current ratio of fuel cell to battery power on the FCEV truck finalised: “Fuel cell to battery power modelling has been done extensively, which is why we will continue to move quickly and deploy machines out in an operational environment to learn more.”

Shuttleworth accepted that there are several challenges that need to be solved in getting the hydrogen FCEV and all battery trucks up to current conventional truck capabilities, adding: “We are leveraging off known technologies to overcome these challenges and enable the machines to equal, or better, current operational performance.” 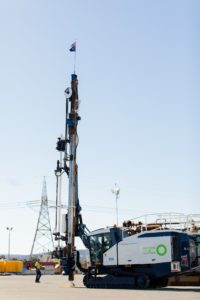 On whether the ultimate intention of the project be to buy conventional electric drive trucks for FFI to convert or to pass the design findings onto one of the OEM majors for them to use the learnings in making their own hydrogen truck, Shuttleworth told IM: “We are considering a number of options to enable us to transition and decarbonise Fortescue’s mining fleet by 2030,” which was also the response to the question on why it has chosen to simultaneously advance a hydrogen/battery FCEV and an all battery truck project though she added that FFI will continue both to look to OEMs for solutions as well as continuing to develop its own technology solutions to achieve its decarbonisation goals.

Not only that, but FFI is also working on a hydrogen-powered drill rig, where again a prototype has already been developed and is in initial tests. It is a converted Atlas Copco (Epiroc) D65 crawler blasthole contour drill rig. Prototype drills will be developed and deployed to Fortescue sites, with Shuttleworth confirming that FFI plans to commence full minesite testing during FY23, including the important element of ensuring refuelling can occur in the mine pit.