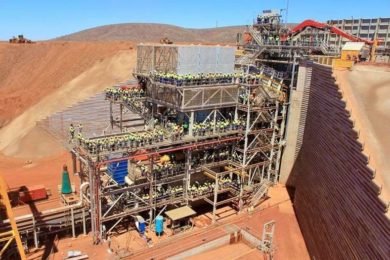 Rio Tinto awarded Perth-based Mondium a A$400 million ($276 million) contract to design and construct the mine in early 2020. This saw the company, a joint venture involving Monadelphous and Lycopodium, undertake all engineering and design, procurement and site construction works associated with the WTS2 development, including the process plant, overland conveyor and non-process infrastructure.

Celebrating the achievement, Mondium said it was a significant achievement for its EPC team, Rio Tinto and delivery partners.

It added: “593 days and more than two million site hours worked culminated in the first loader bucket tipping high-grade ore into the WTS2 run of mine bin. Forty minutes later, the ore was discharged to the WTS1 belt and delivered to the Tom Price stockpiles.”

Back in November 2019, Rio said it would invest $749 million in the development of WTS2 at its Greater Tom Price operations, facilitating mining of existing and new deposits and including construction of a new crusher as well as a 13 km conveyor. In addition to this, the haul truck fleet at the mine would be fitted with Autonomous Haulage System technology to enable autonomous haulage. This fleet has since been commissioned.