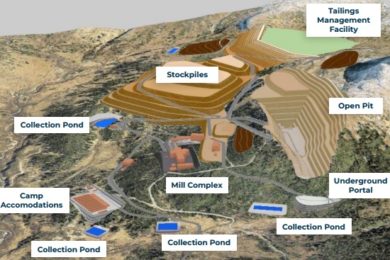 Kutcho Copper Corp has outlined a plan to develop an open pit and underground operation at its copper and zinc project in northern British Columbia, Canada, with the publication of a feasibility study.

A total of 17.3 Mt is planned to be mined over an 11-year mine life, with 14.5 Mt coming from the open pit and 2.8 Mt from the underground mines. A steady-state crusher production rate of 4,500 t/d is expected be achieved by the end of the first year of operations.

After primary crushing at an average steady state rate of 4,500 t/d, an ore sorter using an X-ray Transmission (XRT) sensor would remove low-grade and waste material from the feed to the SAG and ball mills, followed by conventional flotation, regrind and dewatering circuits. Approximately 3,900 t/d of ore would report to the milling and flotation circuit after ore sorting. The XRT plan follows testing of Kutcho samples at TOMRA Sorting Mining facilities.

The project design includes an extensive progressive reclamation program, including the backfilling of the open pit and water treatment during operations and for the closure period.

The company also plans to use liquified natural gas for power generation as opposed to diesel, which will significantly reduce the generation of greenhouse gases and reducing the potential for fuel spills. This would see four 2.5 MW LNG generators plus one on standby used, with a 2 MW diesel generator providing occasional plant start-up assistance.

Vince Sorace, President & CEO of Kutcho Copper, said: “The feasibility study represents a major milestone for Kutcho Copper as we continue to advance the high-grade Kutcho copper-zinc project towards a development decision. The significant redesign and engineering of the project delivers a mine plan that is a predominantly open-pit mining operation with the concurrent development of two underground mines. The mine plan has resulted in a technically robust and capital efficient project with a minimised footprint.

“The results of the feasibility study highlight the attractive economics of the Kutcho project which are resilient at lower metal prices, very attractive at base case prices and exhibit significant leverage to rising prices as reflected in spot metal prices with a C$931 million after-tax NPV (7% discount) and a 41% internal rate of return. We believe that the results of the feasibility study mean that Kutcho Copper is now one of the most undervalued copper investment opportunities in North America.”