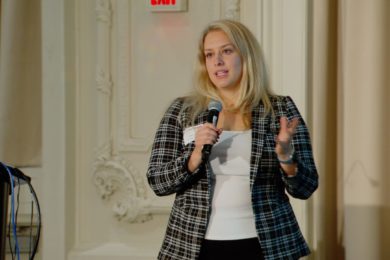 TOMRA Mining is making a case for its sensor-based ore sorting solutions to be evaluated earlier in the mining project evaluation phase, with Jordan Rutledge, Area Sales Manager, arguing that consideration of its use at the very beginning of flowsheet discussions can influence up- and down-stream equipment selection.

The company’s sensor-based ore sorting systems have spread across the mining sector, migrating from industrial minerals and diamond operations to base and precious metals.

Speaking at a sensor-based sorting seminar in Toronto, Canada, held late last month, Rutledge (pictured) said the use of the technology needed to be considered early in the mine development scope in order to leverage the most benefit for the operation.

“Sensor-based sorting should be considered in the flowsheet from the beginning and evaluated in prefeasibility studies to see if it is suitable for the project and will add value to the plant,” she said.

“In many cases, sorting works really well and, as we continue to go towards a green economy, the use of our resources is vitally important. In order to make the best use of them, sorting plays a critical role.”

Rutledge, an event organiser and presenter, joined 40 participants from across Canada at the seminar, which included representatives from miners such as Agnico Eagle, Capstone Mining and Cheetah Resources; from laboratories such as testing and certification company SGS and the Saskatchewan Research Council ; from engineering companies such as DRA Global, Primero, CIMA and Halyard; and students from the University of Toronto.

“The event highlighted the important role of sensor-based sorting technologies in green mining and their potential to unlock significant value in mining projects, as well as the possibilities of digitalisation for supporting customers and managing connected equipment,” TOMRA said.