Kamoa-Kakula underground mine looks like having a battery-electric future 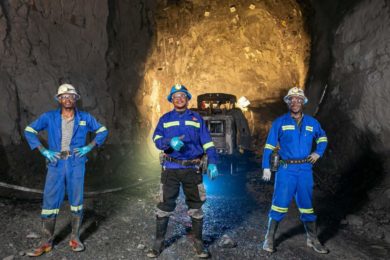 The future replacement mining fleet at the Kamoa-Kakula underground copper mine in the Democratic Republic of the Congo will likely feature battery-electric vehicles – that was the statement from Pierre Joubert, Executive Vice President – Technical Services, Ivanhoe Mines, at the Energy and Mines Virtual World Congress today.

In his presentation, ‘Decarbonising Fleets: The Road to Net-Zero Operational Emissions’, Joubert outlined how the mine, which is set to produce over 400,000 t/y of copper from the complex next year after completion of the Stage 2 project, was planning to move to a zero-emission footprint. The mine, earlier, this month, announced a daily production record of 729 t of copper, with some 63,000 t of copper produced year-to-date as of October 20, 2021.

The company started production at Kamoa-Kakula using a diesel fleet at the operation, with 75,000-115,000 t of CO2/y projected from diesel usage underground, however Joubert said there was growing confidence in the use of battery-electric vehicles in underground mine sites, mentioning that commercial equipment such as 18 t payload LHDs and 60 t mining trucks were available on the marketplace.

At the Platreef operation in South Africa, which Ivanhoe indirectly owns 64% of through its subsidiary, Ivanplats, Joubert said the company was currently undergoing tradeoff studies to assess battery-electric vehicle usage against diesel machines. This study was likely to be see results by the end of the year, with a tradeoff study then following at Kamoa-Kakula.

At the same time, Platreef Phase 1 will see the company employ three full battery-electric drill rigs and three-battery-electric LHDs. These units have been ordered, with operation expected to start in April 2022. IM understands the units in question are Epiroc Boomer M2 Battery face drill rigs and Scooptram ST14 Battery LHDs.

The performance of these machines, which come on top of plans to deploy battery-electric service vehicles, will be closely monitored, Joubert said. The company will also study other battery-electric vehicle deployments across the mining space.

Even at this stage, though, Joubert was able to conclude: “We are fairly certain that the next replacement mining fleet at Kamoa-Kakula will be battery-electric vehicles.”