Epiroc – preaching to the battery converted 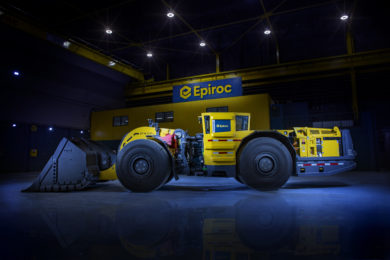 In late October 2021, global underground mining equipment major Epiroc announced that it is now offering customers conversion kits that, it says, “seamlessly transform” loaders from diesel-powered to battery-electric driven means, with the company having secured its first order for the solution from Evolution Mining’s Red Lake gold operations in Ontario, Canada for two diesel ST1030 conversions – the ST1030 being a 10 t LHD. In addition, Evolution Mining also ordered two new Scooptram 14 t ST14 Battery loaders and one Minetruck MT42 Battery to add to the fleet at Red Lake.

Epiroc says the end result is the same or higher performance level as diesel machines with all the added benefits of battery technology including zero emissions and a healthier underground environment. In addition, Epiroc said its service organisation will offer a quick turnaround time for the conversion, which can be included in a Midlife rebuild “and puts machines back on site ready for heightened performance without unnecessary disruptions to production.” 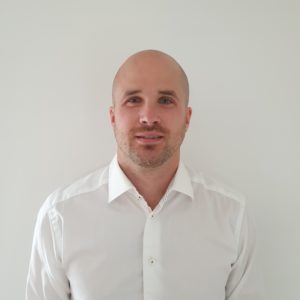 The news followed a September announcement that it had agreed to acquire the business and assets of FVT Research Inc, a Canadian company with expertise in converting diesel-powered mining machines to battery-electric vehicles. FVT Research is based in Vancouver, Canada but has a service and support centre in Sudbury, Ontario. It designs diesel-to-battery conversion kits and rebuilds mining machines to electric versions and has been an important partner in Epiroc’s project to convert the diesel-powered Epiroc Scooptram ST1030 loader to battery electric. The FVT acquisition was duly completed in early November 2021.

IM caught up with Epiroc’s Anders Johansson, Product Line Manager – Midlife services and Custom Engineered Solutions, who has responsibility for the rebuilds and conversions part of the business, for some more insight into the conversion offering. While Canada and in particular Epiroc’s hub in Lively, Ontario, just southwest of Sudbury, is the current focus of the battery conversion project, Johansson comments: “There are many customers in many countries who are interested in benefits and potential of our battery conversion offering. And while the first conversions were in Canada working closely with FVT Research and its location in Sudbury that help us develop the kits and which we have also agreed to acquire, it was a truly Epiroc global project that utilised our resources around the world, including the engineering teams in Orebro, Sweden but also in other locations such as Bengaluru in India.” Epiroc’s Scooptram ST1030 loader was just the first vehicle to undergo the transformation and to have a kit developed but following the successful start with the ST1030, the 14 t ST14 was up next and more than one unit has already been converted using another newly developed kit. The converted ST14 is now being tested. 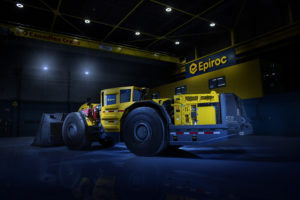 Another view of a battery converted ST14 at Epiroc’s Lively, Ontario location

“Both the converted model types have been developed at the same Epiroc location in Lively, Ontario. There is a lot of potential demand from mines in that region and we have a very skilled technical team there that are already highly experienced in Midlife services rebuild projects, plus of course FVT being close by.” The models are slightly different in that the ST1030 is available as a new diesel machine or electric tethered model in the form of the EST1030, whereas the ST14 can be bought as a new machine in both diesel and battery versions.

IM also asked Johansson why it has opted to have a twin track approach, where customers can opt for a conversion of an existing machine to battery or to have a new battery machine, particularly as neither of Epiroc’s two main underground mining equipment competitors have a formal battery conversion offering. “First and foremost we have gone down this battery conversion route as we have had a number of customers ask us to do it and we strongly believe it has an important role to play in the transformation of underground mining to all electric operations. That said it still has a finite window given that eventually the market will consist of mainly new battery machines – but today there is huge conversion potential. It is one way that existing mines can speed up their electrification journey. It is an alternative to them having to say OK, we are going to swap out our entire fleet with new machines. This way, they can convert some of their existing fleet while at the same time ordering some new battery units, making the phase in period much more streamlined.”

So what is the ideal ST1030 or ST14 machine for a conversion in terms of age and where is the economic cut-off in the consideration of a conversion versus a new machine purchase? Johansson said: “Our recommendation will be to do this when you have a machine that is already coming up for a Midlife services rebuild because there are obviously a lot of major components that need to be removed when applying a conversion kit – principally of course the diesel engine and the gearbox plus some other driveline parts. And if these components are nearly new then it is arguably a waste to scrap them, but in the case of a machine due for rebuild anyway where many of these parts would be been replaced then that is a better TCO conversion case – plus it is more time efficient to do it during a scheduled rebuild. But, it all depends on the overall electrification plan for the mine – and if they have a set timeline that they are committed to then conversions may not be restricted to pre-booked rebuilds. It is also important to say that a conversion will also still be a less costly option than a new machine which is another reason why it appeals.” 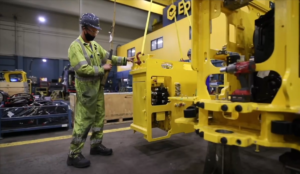 On the longer term outlook for the battery conversion program and potential inclusion of other models in the offering beyond the ST1030 and the ST14, Johansson said: “It will depend on the type of machine and the application, but yes we are looking at other models too, including our underground Minetruck products and even our drills. We want to be ahead of the game and are conscious that we are already leading the way in even offering conversions and so we want to maintain that.” What about conversions of competitor machines? Johansson confirmed that this was something Epiroc has been asked to do and while it could potentially be done, it would be only be a consideration on a case by case basis where a customer already had a mixed Epiroc and other OEM fleet was converting Epiroc machines.