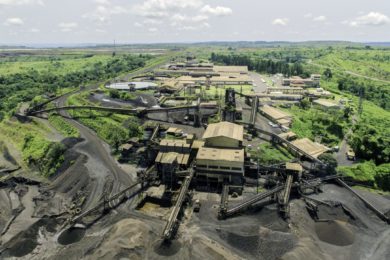 Recently, China’s Shanghai Zhenhua Heavy Industry signed a contract for delivery of two sets of 3,000/4,000 t/h bucketwheel stacker-reclaimers with global manganese major Comilog in Gabon. Comilog is specialised in manganese mining and is the largest manganese mining company in Gabon, the second largest exporter of manganese ore in the world, and is part of the French metallurgical group Eramet.

The ore is extracted from an open-cast mine on the Bangombé plateau. This world-class deposit is one of the largest on the planet, with an ore content of 44% manganese. After the extraction, the ore is processed in a washery to be crushed, ground, washed and sorted, before being shipped to the Moanda Industrial Complex (CIM) for enrichment then railed to the port of Owendo for export.

The two bucket-wheel stacker-reclaimers in this contract are to be used at the manganese ore stockyards at both the Owendo and Moanda locations in Gabon, and are scheduled for delivery in January 2023. The equipment has remote control and automated operation functions for bulk cargo machinery that was independently developed by Zhenhua Heavy Industry, which it says can effectively improve operational efficiency, assist Eramet to achieve the goal of increasing annual output by 7 Mt, and strengthen the competitiveness of the company in the bulk export market as well.