Kışladağ and Weir Minerals on the HPGR-backed gold recovery trail 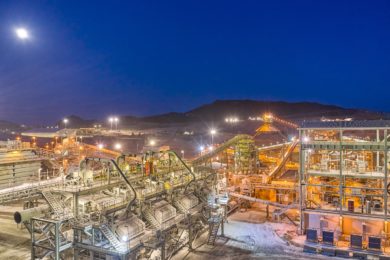 The story that led to the installation of a Weir Minerals Enduron® high pressure grinding roll (HPGR) at Eldorado Gold’s Kışladağ heap leach operation in Turkey is a fascinating read, as well as a great example of the benefits of using such technology.

Back in March 2018, Eldorado announced it would suspend mining to evaluate processing options for the operation. This decision followed extensive laboratory tests that indicated gold recoveries would continue to trend downwards around the base of the open pit where mining was underway.

This suspension, plus further engineering and test work, led to the company advancing the potential development of a mill project. The transition away from its heap leaching roots to a possible mill and carbon-in-leach (CIL) process would have added significant capital costs and shortened the mine life significantly.

Before making this significant capital decision, Eldorado paused to take time to undertake the necessary technical work and sought the technical collaboration of Weir Minerals on a solution.

“It was a very challenging period,” George Burns, President & CEO of Eldorado Gold Corporation, told IM. “Kışladağ is a cornerstone asset in our portfolio. It required collaboration with our geologists, metallurgists, site teams and technology providers, including Weir, working together on a solution.”

In late 2018, results showed increased recoveries from an extended leach cycle. Following a deeper understanding of the geometallurgical drivers of the sulphide component of the deposit, improved heap leach recoveries were realised by optimising the metallurgical conditions. With these improved recoveries confirmed, the heap leach plan was revised in early 2019. Eldorado announced plans to resume mining, crushing, stacking and heap leaching at Kışladağ, and suspended plans to build the processing plant.

The decision came following metallurgical test work on the material placed on the heap leach pad in 2018. Gold recovery had increasingly exceeded expectations throughout the year, providing a new, positive heap leaching outlook beyond the near term. At the same time, Eldorado worked with Weir Minerals on the potential use of an HPGR at the operation.

An improved understanding of the leaching process on its low-grade ore and the potential of this cost-effective grinding addition provided it with the confidence to continue heap leaching beyond the short-term time horizon previously envisaged.

“Our collaboration with Weir on this effort is an excellent example of how Eldorado collaborates with technology leaders and seeks out solutions,” Burns said. “We believe this is a strength of the company’s core business values. We are agile and flexible ‒ a good example in both business and operations to find innovative, technical solutions and demonstrate prudent capital discipline. Ultimately, the solution was the best technical and economic decision for Eldorado.”

The OEM had been provided with samples on several occasions to investigate different flowsheet possibilities.

“The benefits of HPGR in heap leaching recovery were known by the site’s crew,” he said.

All the time, the mine operator, Tuprag, Eldorado Gold’s subsidiary in Turkey, was evaluating the impact on gold recovery.

Although HPGR in closed circuit with screening was also tested, most of the test campaigns were focused on a configuration with so-called ‘Partial Product Recycling’ (PPR), according to Serhat Onol, Weir Minerals Senior Process Engineer.

“This system includes splitter plates underneath the rolls which ‘cut’ a proportion of the product discharge and reverts this back to the HPGR head feed,” he explained. “This recycle stream can be adjusted online to adapt the product grind towards the downstream requirements.”

PPR is not an option for every application but for Tuprag – due to the feed and desired product size – all specifications showed it was the best route.

“The hybrid solution with screening serves to increase the flexibility and to control the circulating load to the HPGR,” Onol said.

With capacity rates of around 4,200 t/h at Kışladağ, the screening area requirement was reasonably high, he explained.

“The hybrid solution uses screening only for the recirculating stream: the centre product of the HPGR reports to downstream leaching, whereas the rest is recirculated,” he said. This not only removes the fines re-entering the HPGR and, thus, reduces the circulating load, but also avoids the over-grinding of fines before leaching.

The PPR option, itself, is a very flexible operation, with the adjustable discharge splitter plates providing the best circuit flexibility in terms of throughput and product size, according to Onol.

With the main driver of the HPGR installation being an improved gold recovery scenario, leading to an increased heap leach life, the pressure has been on Weir Minerals to come up with the goods.

The final flowsheet, which includes a 2.4 m diameter by 2.2 m long Enduron HPGR with the capacity to process 4,200 t/h, is much simpler than the existing circuit, according to Dierx, with less equipment to maintain, control and monitor.

“A single Enduron HPGR will replace all of the five existing tertiary crushers of which liners would have an average lifetime of circa-one month with a crusher availability of 85%,” he said. “The HPGR tyres have a wear life close to 18 months, with the HPGR achieving a high asset availability of more than 95%.

“Additionally, as a result of the HPGR combined with the hybrid PPR system, the existing four tertiary screens are also being decommissioned.”

Not only has the HPGR alleviated the use of this equipment, it is also set to boost that bottom line gold recovery.

“During testing, it was determined that the circuit configuration and HPGR operating conditions, such as pressure, have a direct influence on the gold recovery,” Dierx said. “The current expectation is that the average recovery increase after the commissioning of the Enduron solution will be approximately 4%.”

This could bring gold recovery to approximately 56%, as was declared in a 2020 press release from Eldorado that highlighted a 15-year mine life at Kışladağ with an average annual production of 160,000 oz.

One of the largest brownfield HPGRs Weir Minerals has ever installed has just processed its first material at Kışladağ, which is testament to the hurdles both the Weir Minerals and Tuprag teams overcame during the height of the COVID-19 pandemic.

“Despite the challenges we faced during the pandemic, we were able to fully install the machine, including pre-commissioning, in only 22 weeks,” Dierx said.

This was achieved by minimising the amount of work carried out on site via pre-site testing and modular HPGR assembly.

“As the available footprint in existing sites is limited, the unique Enduron design (length:diameter ratio) not only improves the grinding efficiency but also allows for easier implementation with less civil requirements,” Dierx said.

The machine has the potential to be digitally connected to the Weir Synertrex® IoT platform where operators can benefit from direct access to maintenance specialists, who will be monitoring performance and provide necessary operating guidance.

And the Weir Minerals team is confident more Enduron HPGR installations will follow the one at Kışladağ.

“We are very proud of the product’s recognition by our customers as the Enduron HPGR has been selected for all major greenfield HPGR projects in the hard-rock space,” Dierx said. “Despite all the key Enduron differentiators, it is not only merely about the product but particularly the wider experience across Weir Minerals in both the upstream and downstream processes via our wide product portfolio.

“Particularly in these brownfield applications, the system is not operating in a vacuum and every process change influences how the overall circuit works. This requires tacit knowledge, which Weir Minerals holds across their global teams.”

Eldorado’s Burns concluded: “We are pleased to implement a solution that increases gold recovery and supports a 15-year mine life at Kışladağ, allowing Eldorado to continue to provide employment and economic opportunity in the region, as well as provide a solid foundation for future growth.

“Kışladağ has been the cornerstone asset of Eldorado for over a decade, producing over 3 Moz of gold and generating significant value for all stakeholders during that period. This project is a testament to our exceptional team and technology partners working together to execute in challenging circumstances during the pandemic.”